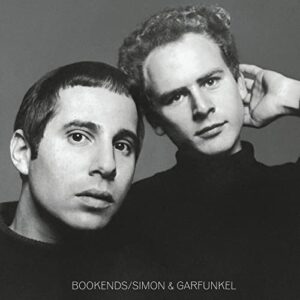 First and foremost, a special thank you to those that serve in the United States military and in honor of Memorial Day, those that gave the ultimate sacrifice protecting our freedom. I wanted to review an album this week that truly conveyed “America” and so I did was most would do, consult the internet. Upon finding a Paste Magazine article discussing the top ten, I’m listening to their third most patriotic album of all time, since #1 and #2 were both previously reviewed albums on the blog.

A few years ago now, I discussed a famed musical duo called Simon and Garfunkel and all the success they had in their careers. After that particular album was released and the band rose to a new high in terms of sales and fame, everything began to fall apart. They became jaded on the industry and the record-making process, and Paul Simon developed a major case of writer’s block.

Their popularity never waned however, and perhaps even climbed to greater heights when director Mike Nichols offered them a chance to write the soundtrack for his blockbuster film The Graduate. In spite of viewing the opportunity as ‘selling out’, they agreed after reading the script and respecting Nichols. Work began on their fourth studio album as well, but it took nearly two years to get the guys into the studio and seriously put pen to paper.

Finally in April of 1968, Bookends was released amidst great anticipation from the label and fans. The whole thing was a concept album exploring the life journey from childhood to old age. Side one was mostly material from the previously mentioned soundtrack—and you could begin to hear Simon’s lyrical changeover to disillusionment and mortality. None of the changes in tone mattered for sales, with the record peaking at No. 1 in both the USA and the U.K.

Ultimately, their effort to thumb their noses at the modern musical industry by making something for them, did nothing but place them on a higher plateau—putting them with artists like The Beatles, Bob Dylan and the Rolling Stones in terms of popularity and respect. S&G were considered at the forefront of the cultural movement of the 1960s, which was surrounded by civil rights and questioning authority.

Confidently saying I’ve never heard this album before today, it’s certainly interesting. In sub context, you can see why it fits the “Americana” label provided on the list I read. It tackles subjects that most Americans ponder during the course of their lives. It’s certainly not “patriotic” in the modern sense of the word, but no one can deny the impact it had on culture and society at the time. It also led to Simon being approached by numerous other film producers looking for him to sign on to their projects. Cities like Saginaw, Michigan used songs from the album much later in history as anthems for restoration projects—and Bernie Sanders utilized a track for his presidential campaign in 2016. That type of long-range impact is something you don’t see all that often.

The album has this aura of convergence—musical, personal and societal forces all coming together for a once-in-a-lifetime record that’s done nothing but garner more respect as time has passed. Simon has even credited it as “his first serious piece of work”.

Since this album, it’s been a roller coaster for S&G, growing apart, reuniting, parting again, and performing for major benefits. Simon fully retired from music in 2018 and Garfunkel is more tuned into poetry and acting today. While this may not be considered top to bottom their greatest work, it’s still an iconic piece of music history that’s well worth your 30+ minutes today. Hope you all had a relaxing extended weekend, Happy Tuesday!