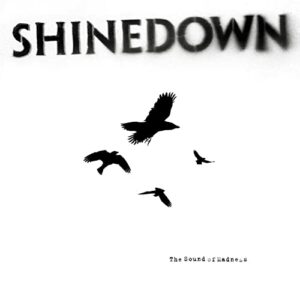 Certain genres of music come and go. One day they’re all the rage, the next they sit on the shelf for a decade. Today’s featured act has taken advantage of the recent renaissance in metal, or perhaps more appropriately, alt metal. Fun fact, they even have the most No. 1 singles on the Mainstream Rock charts of any band, with sixteen.

Lead singer Brent Smith was in a band called Dreve that signed a deal with Atlantic Records in 2000. When Atlantic became unhappy with the band, Dreve was dropped prior to releasing a record. In a very unusual move, Atlantic kept Smith, and signed him to a development deal where label reps would help hone his skills and recruit a band for him.

Smith moved to Jacksonville, Florida and started working on this project right away in 2001. The studio set up auditions and eventually they created a four-piece band and called themselves Shinedown. Recording began almost immediately upon formation, and the label expected to be kept in tune to their progress. After they created a handful of demos, they were sent back to Atlantic who liked what they heard and green lit a full-length album. Shinedown’s debut would go on to hit shelves in May of 2003, not to much fanfare. But after extensive touring and a couple late-blooming singles, eventually reaching platinum status in the USA.

After releasing a second album in 2005, it seemed the band had carved a nice little niche for themselves—but internal struggles proved too great for the original lineup to stick together. The group parted ways with the bassist and lead guitarist. It was later noted the two were dealing with substance abuse issues.

Smith spend most of 2007 writing new material in a studio near Stone Mountain, Georgia. His work in those sessions was prolific, with almost 60 tracks penned. With new band members in place the final result, The Sound Of Madness was released in June of 2008. Smith relied more on personal experiences to write the album, and subsequently was praised for the deeper and more emotional themes.

Previously Shinedown had seen amazing success releasing singles, but overall album sales were a touch slower. That was not the case with this particular album. Six singles all reached the charts (including a couple making it all the way to No. 1) and the sales year to date are nearly five million worldwide. The band spent another two years on the road for promotion, bringing their total to over one thousand live shows in just over five years. That’s some serious dedication.

While unquestionably the album still relies on the metal roots, you see a diversity in the music that was truly unexpected from the band. They penned a couple ballads and opened up about family deaths, having kids and everything that comes with them. The material exposed the group to new listeners and new radio stations across the globe.

If you’re a really big fan of the genre, you can probably tell the bands apart. If you’re not, many in the alt metal space may all sound very similar—but Shinedown’s big singles stick out. “Second Chance” is a perfect example of that, an instance where I knew the song and could probably sing along to all the words before I knew who the band was. Are they a group you’re going to hear an album and immediately go out and buy their entire catalog? Probably not—but they’re certainly one of those band you hear and think “I should toss that on again” in a few days, which is a great compliment.

Shinedown is out there, grinding away on huge tours still today. I’ll have to catch up on some of their more modern material, but for today, toss The Sound Of Madness on. Most of you are probably saying hello to the band for the first time today, but always remember, sometimes goodbye is a second chance. Happy Tuesday!