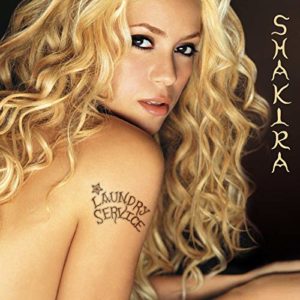 By Austin Krueger on February 4, 2020 in Online Life

Sports and music go together for a variety of reasons. As an artist, being a part of sporting events can introduce you to an entirely new audience—especially when that sporting event is viewed by over one hundred million people. Today’s featured artist was featured during the halftime show of Super Bowl LIV on Sunday and, coincidentally, is someone I’ve never listened to much before. Let’s dig in!

Shakira Isabel Mebarak Ripoll was born in Barranquilla, Columbia in February of 1977. Her grandparents were from Lebanon and emigrated to New York City where her father was born. Dad then immigrated to Columbia at age five. Shakira is Arabic for “grateful.”

While growing up on the northern Caribbean coast of Columbia, she began writing poetry at the very young age of four. She loved her dad’s typewriter and asked for her own as a Christmas gift. Receiving one at age seven, her writing only got stronger. She began writing music at age eight. Years before, her older half-brother was killed in a motorcycle accident and her first song inspired by her father who for years wore dark glasses to hide his grief.

Shakira also learned about belly dancing at a young age and was immediately hooked. She got up on a table in the middle of a restaurant mimicking what she’d seen and moving to the beat. The adoration of the audience made her realize she wanted to be a performer someday. She’d belly dance every Friday for kids at school and became known for it by her classmates. She demonstrated an ability to sing too, but was once kicked out of choir at Catholic school because her vibrato was too strong. The music teacher said she “sounded like a goat”.

Between 10 and 13, Shakira performed in Barranquilla and gained recognition. A local theater producer was so impressed she convinced Sony Columbia to hold an audition for Shakira. Her debut album was released in 1990 when Shakira was only 13 years old. After another record and some time off, she’d strike it big in 1996 hitting #8 on the U.S. Latin chart.

After a famed performance on MTV Unplugged, Shakira began working on an English crossover record. Gloria Estefan helped her learn the language and Shakira spent a year writing new material. The result was Laundry Service which came out in November of 2001. To say it was a success might be an understatement. It would top the charts in ten countries total and to date, has sold over twenty million copies worldwide. Critics loved her different musical styles and the overall production quality. Her vocal talent was also undeniable, and people loved how unique the sound was. Without knowing the rest of her discography, I would say some of this album can be a bit generic—but you certainly won’t mistake it for a different pop star of the times.

Going from Latin pop to guitar solos to a soft rock ballad certainly makes for an interesting record—but what an amazing first English crossover for someone that twelve months prior didn’t speak the language. She was immediately compared to Jennifer Lopez who, coincidentally, she would share the stage with at the aforementioned Super Bowl.

This album catapulted her career into the stratosphere and Shakira truly became a star. Eleven studio albums later and nearly 100 million sold, no one would debate her place in music history. She’s won three Grammy Awards and was nominated for an additional three. She even holds six Guinness World Records, mostly related to album sales and social media likes. In her hometown, a 16-foot tall statue was installed in the park near the soccer stadium, if that’s not the highest of praise, I don’t know what is.

We’re really getting into some new tunes so far in 2020, hopefully the trend can continue. Give Shakira’s Laundry Service a shot today—if she’s good enough for the biggest football game of the year, maybe you’ll find she’s good enough for your headphones whenever, wherever. Happy Tuesday!