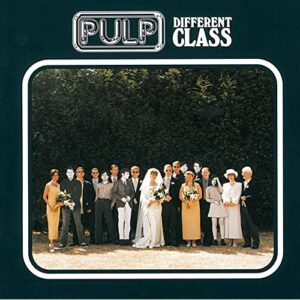 It seems pretty well documented at this point that ‘90s rock or alt rock is probably my “go-to” genre and period in music. While I listen to music from all periods, that era was most impressionable on me. When someone says they have a band or song from that period and it’s new to me, I’m astounded. But that’s exactly the case today—both the band and their most popular track are completely foreign to me.

We have to start by going all the back to 1978 and The City School in Sheffield, England. Jarvis Cocker and Peter Dalton—then 15 and 14 years old respectively—were classmates and looking to start a band. They were calling themselves Arabicus after a coffee bean, but their true goal was to be called “Pulp” after the film starring Michael Caine. They didn’t make the change because they felt that Pulp was too short. Eventually they eventually merged the two names and went by Arabicus Pulp, playing their first gig in 1980.

Their sound was typically described as eclectic and most resembling ABBA—but with a twist. Popular British DJ John Peel was into that sort of music and he granted the band a session on his show. It was a huge boost for the group and got them a local following. Despite the exposure, apart from Cocker, the rest of the band left for college and the group became stagnant. Cocker assembled a new lineup recorded a mini album in 1982. Since it was now his vision, they were simply going by Pulp. It was a commercial disaster, but none of the members were discouraged and decided to keep at it.

Pulp played a number of gigs with poor outcomes, notably one at Brunel University that ended in a full-scale riot. The second and third commercial albums were rushed out and resulted in similarly poor sales. In 1988 Cocker took some educational courses and the band folded for a brief period, with their fourth studio record coming out in 1994. They finally started seeing some success charting in the U.K, but could they capitalize on that light boost?

Today I’m listening to Pulp’s fifth album titled Different Changes released in October of 1995. Island Records decided to release two tracks before the album hit the shelves and building the anticipation worked. The album debuted at No.1 on the U.K. charts and has sold several million copies. That very success across the pond led them to feel they could have a smash hit even in the states. Two tracks were leaked in the U.S. and most beloved was the single “Common People” giving Pulp their first taste of worldwide fame. The album received universal acclaim, with many critics remarking how it was the first time the band actually had a release that matched their potential.

Britpop was going through a bit of a renaissance during this time in the U.K. which undoubtedly helped spike their popularity—but this was hardly a flash in the pan record. Even in retrospective reviews, it’s heralded as easily Pulp’s finest effort but also one of the best records do hit shelves that year. Their style was so theatrical (remember that ABBA reference) but hammered with synth/new wave/disco influences. It was music that could be put into an art museum—something totally off the wall, but really well done with broad appeal. As I often reference, Rolling Stone has this as the 162nd best album of all-time—and perhaps the biggest compliment, William Shatner covered “Common People” for his own single with the help of Ben Folds. As Cocker noted, “Captain Kirk is singing my song! So that was amazing.”

Pulp took a nine-year hiatus in 2002, reuniting briefly in 2011 for just two years. They’d play 22 concerts, reissue their classic albums and soak in fans clamoring for more. Maybe one day they will ride again, but Cocker has insisted the band has “cruised off into the sunset”. If you’re like me and haven’t heard this before, give it a shot. It’s got a unique feel to it and it’s a fun listen for your Tuesday!