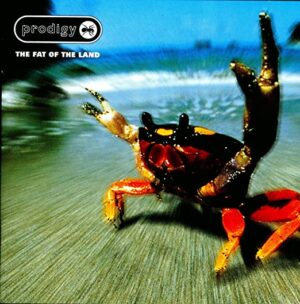 Recently a loyal reader asked, “why don’t you listen to more electronic music?” The answer is: I listen to quite a bit—but don’t talk about it nearly enough. To rectify, here is one of my absolute favorites of all time.

In 1990, songwriter/keyboardist Liam Howlett founded a band called The Prodigy in Essex, England. He started playing piano at a very young age and had become so adept; he could play very difficult passages in just a few run-throughs—hence the band’s name.

The group came together after Howlett decided to pursue a career in music and was DJing at a rave. There he met dancer and vocalist Keith Flint in 1989. Flint asked Howlett for a mix tape, which Howlett made and delivered a few days later. The tape was so well received by Keith and a buddy, they immediately decided to join the group. They’d add another couple of vocalists, and the first incarnation of The Prodigy was off and running.

While playing gigs around London, Howlett created a demo tape and began shopping it around. Eventually he found XL Recordings who agreed to release a four-song demo for the band. One track was paired with a popular animated film series at the time, which not only caught fire at rave parties, but also set a new trend with other series and artists.

The Prodigy was having so much single success, they’d go on to release two studio albums in 1992 and 1994. They had a solid following in the U.K. but were struggling to break through to the USA market. That all changed in 1997 with the release of their third studio album The Fat Of The Land. XL backed it in the U.K., but they had concerns about it becoming a hit in the US, so they relied on Maverick Records for distribution.

Released the last week of June in the states, the album hit No. 1 on the Billboard 200 chart on July 19th. It was certified double platinum by the end of the year. In 1999, the album entered the Guinness World Records as the fastest-selling U.K. album of all time. It was also nominated for a Grammy Award for Best Alt Music Album, but lost to Radiohead’s OK Computer, widely considered one of the best albums in music history.

This album was different for a variety of reasons, first, Howlett didn’t create the album alone for the first time. Flint provided vocals for a few tracks and co-wrote three songs, included the two biggest hits from the album. They also dropped the “The” and streamlined the band’s name to Prodigy.

The list of accolades for this album are too many to list. Q magazine has it as the ninth best album of all time, probably the highest praise—but it’s on every best-of list for the year and the decade. What was so different on this one? They simplified everything. The melodies, the arrangements, less sampling—they took took the hard beats, crazy synth use and hard breaks—but adapted it for radio. It was all the stuff hardcore ravers wanted; in a package the label could sell to mainstream radio.

Normally doing so would get the band labeled a sellout by devout fans, but in this case, the band had this success almost defying the mainstream. They still did it their way, in a fashion fans loved—it just so happened to also become incredibly popular. Being exposed to this album in my teen years, it was everything you could ask for in the electronica genre. Every subsequent album had to stack up against this, which was a difficult task. It’s just that good.

Prodigy kept it going through the years, until Keith Flint passed away in 2019. Fans began using the hashtags “Firestarter4Number1” on various social media platforms to get the song on the charts again. It worked and was used to raise awareness for suicide prevention. Howlett intends to continue releasing music under the brand, stay tuned for that. Until then, breathe with me—and Happy Tuesday!

TDS negotiating with NFL Network and Redzone
TDS.net email Log In has changed