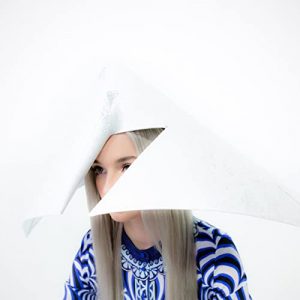 There are ways to get famous as a musician that exist today that simply didn’t even as recently as ten years ago. While I can safely say that I don’t fully understand all of those, this week I tried to get to know one person’s music and new path to notoriety. I keep hearing more and more about today’s featured artist, so let’s dive in.

Moriah Rose Pereira was born in Boston, Massachusetts in January of 1995—a New Year’s Day baby in fact. The family moved to Nashville when she was a child, but the northeast influence never left. She recalls wanting to be a Rockette as a kid and starting to take up dancing, which she trained for eleven years. Moriah completed half of her education in public school, where she states she was bullied for being too skinny and too quiet.

In 2011 she started her own YouTube channel called “Moriah Poppy” (which has since been deleted) and now her current channel named simply “Poppy”. She would make rounds doing social media festivals, namely VidCon in June of 2012 and DigiTour in June of 2013. Apparently, this is a great way to get noticed, and now going by Poppy professionally, she moved to Los Angeles to pursue her music career. Upon arrival, she made a variety of abstract promotional videos that added to her solid following. As of today, she has nearly three million subscribers and six hundred million views.

Poppy signed to Island Records in 2015 and released a single that same year with an EP shortly thereafter. She dropped an experimental ambient music album in 2016 and at that point the label felt she was ready for a full-blown commercial release. Poppy.Computer hit shelves in October of 2017 with an accompanying 34 city, 40 concert tour. Around the same time, she starred in a series of Comedy Central videos called “Internet Famous with Poppy”. This all led to some solid buzz around her and the record, which would end up spawning five commercial singles. Rolling Stone put it in the top 20 of best pop albums of 2017—which I assume consisted of hundreds if not thousands of options. Critically, some adored her use of J-pop influence into the American music culture. They even compared her pop chops to the likes of Lady Gaga or Gwen Stefani but with the internet-age influence of what was big globally, not just nationally.

Poppy herself has very glossy lyrics, how much of that is her true vocal versus digitized, I can’t say—but it helps make the listen more enticing. Poppy cites her influences as Cyndi Lauper, unicorns, and Elvis Presley. Strange? Yep. But oddly enough, when I listen to her music, I sort of get it. Although this album doesn’t really seem to have style that reflects “The King”, I trust as she grew up, her music evolved as well.

Her public persona is very aloof and guarded from both media and fans alike. It seems like the audience only sees of Poppy what her and her team want you to see. Something unheard of typically in the history of musicians, but in today’s modern age, likely important to protect certain aspects of your digital identity. Humorously, I told a friend researching her caused me to go down some rabbit holes, and that’s exactly what the goal seems to be—I found out she’s actually been referred to as a one-woman digital rabbit hole. Mission accomplished, Poppy.

Poppy is a make-up tutorial host, actress and part-time WWE guest star in addition to the music and the videos. Simply being honest, this revolution and type of music isn’t for me—and I still don’t fully get it, but I’ll always respect anyone for hustling and grinding in a way that works for them. If you love pop and music, her combo on this album might just be for you. Even if it’s not, a couple tracks might get your toes tapping to the pretty sick beats. Happy Tuesday!