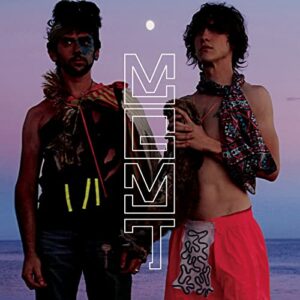 Not conforming to the standards is a big risk. When you’re releasing music that doesn’t fit into the friendly defined genres that already exist, some tend to cast you aside and put you in the ‘do not play’ bin. Today’s featured act has created their own sound, blending styles from all across the board, and found their own success.

Ben Goldwasser and Andrew VanWyngarden were attending Wesleyan University in Connecticut during the early 2000s. They met and became friends and started exploring each other’s musical catalogs—showing each other what they liked. That turned into experimenting with sounds of their own, and they settled on what they called noise rock combined with electronica. This psychedelic pop vibe would later become their signature.

In 2002, they attended the Bonnaroo music festival as fans, hoping for inspiration. They found it. The duo started a band called The Management and created two demos. They found out that band name was already taken, so they abbreviated it to simply MGMT. Goldwasser and VanWyngarden did a unique thing and actually stayed in school and finished in 2005, only devoting all their attention to music when they were done. They’d drop their first EP in late 2005, hoping to land that record deal.

In fall of 2006, Columbia Records contacted them expressing interest—which the duo initially thought was a prank. It wasn’t, and they hit the studios in early 2007. MGMT’s debut album Oracular Spectacular dropped in October of that year. To promote it, they gave away a single inside a magazine in Sweden, which could be picked in stores throughout the country. After the album release, they toured Europe before coming back to the states.

Critically, the album was a success. Reviewers loved the catchy pop nature of the songs, but praised the sincerity of the record, as it was clear the band wasn’t putting out an album only to make money. It was noted it had the feel of a college-dorm experiment that happened to hit the jackpot. Sales were fairly slow, never generating more than 17,000 units in a given week. However, from January of 2008 through April of 2010, it would sell at minimum 2,000 each week. Slow and steady wins the race, as they say. It currently sits around 4 million copies sold worldwide, with it hitting Gold status in the USA.

Because this feels so unique, I think it’s hard the first time you hear it to really make a judgment call. As you pick it up, set it down, think about it, and put it on again—it starts to come together. You find yourself singing along to tracks that you wonder, “where did I hear that song again?” While you’d say it’s a pop album, it’s beyond that in so many facets. It’s got a couple beaty dance tracks—and almost listens like an indie rock album in spots.

In 2012, Rolling Stone ranked the album at number 494 in the 500 greatest of all-time list. That may not seem like a big deal, but the album never hit the mainstream to the extent to get that sort of praise. It wasn’t really nominated for any huge awards, and while it spawned three incredibly solid singles, each one was almost a genre of its own. Because of that, it’s hard to find stations on broadcast radio or satellite that can cater to that diversity.

After releasing four albums through 2018, they decided to go independent and create their own label. Dropping singles since that debut, a new album appears to be forthcoming in the near future. Until then, blow the dust off Oracular Spectacular and give it another round today. I think you’ll be surprised how captivating it is, and if you’re like me, once it’s done, you’ll toss it back on for a second round. Happy Tuesday!