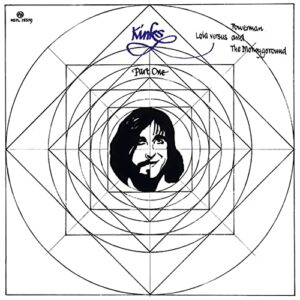 Saying the words British Invasion together conjure up images of very specific bands in the 1960s. Everyone knows that one band featuring Ringo, but other very influential groups of the time don’t always get their proper due. Today’s featured act should be right up there, yet they have zero platinum albums in the USA.

Ray and Dave Davies were born in London in 1944 and 1947 respectively. They were the two youngest, and only boys, of their family’s eight children. From a young age, the boys were immersed in a world of varied musical styles. Their parents were big into classic jazz and their older sisters were always playing modern rock and roll. The boys started to play a little guitar and formed a band while in grammar school. Their first performance was so well received they began to play at local pubs. They went through a series of vocalists, including a guy who eventually became relatively well-known on his own, Rod Stewart.

In the early 1960s, the group was touring around as the Ray Davies Quartet, but they cycled through musicians, band names, and managers trying to get noticed. Finally, they started going by the name Kinks, something teetering on the line of edge and fun. Shortly after, they got the attention they were looking for. They released a variety of singles and finally hit it big with “You Really Got Me” in ’64 that led to a major label signing them.

Today I’m listening to the Kinks eighth studio album Lola Versus Powerman And The Moneyground, Part One—a long winded name, and the shocking eighth record in just under six years. This was the first album the group released since their ban on performing in America was lifted a few months prior.

The Kinks set out to make a satirical record about many facets of the music industry, including song publishers, unions, and the press for their influence on which songs become hits. The tracks themselves varied from slow ballad to hard rock songs—all stemming from their childhood musical influences because they also wanted to make music they all enjoyed. In spite of it being all over the board, reviews praised the album. British critics enjoyed the ‘cheeky nibble’ they were taking out of the industry and loved how ‘simple’ the album was, yet it worked on so many levels. Shockingly, even with their mega lead single in “Lola”, the album never charted in the U.K., and never sold all that many albums in the U.S.—even after hitting no. 9 on the Billboard 200.

Part of the disinterest in the U.K. could have been that the lead single was pulled from commercial radio because of the use of the brand “Coca-Cola”, which violated the country’s policies on product placement at the time. A reworked version that changed the lyric to “cherry cola” was released, but never caught the same fire as the original in the U.S. It’s too bad for early ‘70s England though, because this album is not only good, it’s honestly a really fun listen.

This was a point for the band where they were truly finding out who they were, and you started to hear them take shape. They were especially experimenting with different guitar work, which would lead to some really cool subsequent albums. The Kinks have stood the test of time in that sense, with so many of their singles being used in modern cinema to this day. Even the mega-popular “Guardians of the Galaxy” franchise has used a couple of their songs, nearly fifty years later.

While the band called it quits in 1996, the brothers reunited and are hoping to get the remaining living members together for a small reunion. Covid may have put a damper on that, but they’re still looking to release and album in 2020. We’ll see, but until then, I know what I am and I’m glad I’m a man! Happy Tuesday!