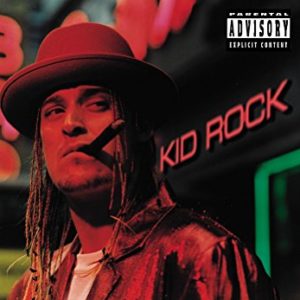 Coming back from a vacation can be a tough proposition—leaving paradise and getting back to the daily grind. For me, it means getting back to listening to and blogging about music, and I certainly can’t complain about that. Especially when another reader chimed in with a request today!

Robert Ritchie was born in January of 1971 in Romeo, Michigan. Robert’s father owned multiple car dealerships in the area as well as a six-acre estate with a nearly 6,000 square foot home attached where Robert grew up. They’d often pick apples on the property and care for their horses. As a young child, Robert became interested in hip-hop and began to breakdance and taught himself how to rap.

Leaving the friendly confines of the estate life, he began to DJ as well as pump gas and sell drugs to make a living. Despite being a white rapper in Detroit, some of the local promoters were excited by his style and performances. In 1988, Robert became Kid Rock and signed with Jive Records. It seemed things were starting to come together but unfortunately a poor debut album combined with the rise in popularity of Vanilla Ice led to unfavorable comparisons and he was dropped. In hindsight, this may have been the best thing to happen. It caused him to rethink the “rapper” label and he began experimenting with some rock and country styles.

After two more disappointing releases, Atlantic Records saw him perform live, and couldn’t believe the sight. Kid Rock was playing dozens of instruments on stage, controlling his own turntables and singing. They gave him a $150,000 advance and Kid Rock hopped into the studio and began recording. The result was Devil Without A Cause released in August of 1998.

The effort’s genre is completely all over the place, but the album was praised for its ‘eclectic’ sound. There are aspects of arena rock, country, heartland rock, metal and hip-hop. Critics were generally very impressed with the release, calling it, “a blend of Skynyrd, Run DMC and Van Halen.” Sales were incredible, backed by lead single “Bawitdaba,” the album was certified platinum within six months. Today, it has sold 11 million copies in the U.S. and nearly 20 million worldwide. Loudwire magazine called it one of the best 10 albums of 1998 and Blender named it one of the 100 best albums of all-time. Many artists have cited Kid Rock as their influence to mash-up various types of music, especially anything country and hip hop.

This album was introduced to me immediately upon its release —and quite frankly, you couldn’t listen to music at that time without hearing a track or two on the radio or MTV. Initially, I couldn’t decide what I thought of it. It’s so much blending that’s it’s hard to decide what it is. What changed my view on his music was when I went to go see Metallica in Milwaukee in early 2000. Kid Rock opened for them, and it was probably the most memorable performance I’ve ever seen. Over all those years, he never lost that zest for performing and played every instrument on stage and had the audience in awe. Ever since, I had a new respect for his grind, and listened to this album differently. Sure, it has some flaws, but the songs that are good, are really good and have stood the test of time. And yeah, he’s an odd duck outside of the studio, but hey, this blog is just about the music.

Listening to this today has transported me back to 1998 and got me to sing along with a couple tracks. I think it will have the same impact on you today. And for $7 bucks, you’ll really feel this album!

Watch Game Night, 15:17 to Paris, and more on TDS TV
Live in the moment with mindfulness meditation