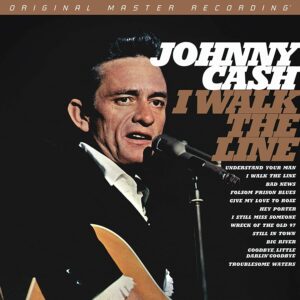 Occasionally a music icon crosses my path and while I respect them, their music isn’t necessarily for me—but today’s featured act doesn’t fall into that category. This artist’s name is synonymous with country music and is hands down my all-time favorite from the genre.

J.R. Cash was born in Kingsland, Arkansas in 1932. In his family, J.R. was smack in the middle, with three older siblings and three younger siblings. His mom wanted to name him John and his dad wanted to name him Ray—so J.R. ended up being the only thing they could agree on.

J.R. had a tough upbringing. His family settled on land that poor families could work on in exchange for later getting the opportunity to own. He worked in cotton fields, singing along with his family while they partook in the hard, physical labor. Experiencing the Great Depression first-hand ended up becoming inspiration behind many of J.R’s songs years later, but his earliest memories were dominated by gospel music and the radio. His mom and a buddy taught him guitar at a young age, and he started writing songs around age 12. His early vocal was a high-tenor, then upon puberty turned into the boss-baritone we’re familiar with in most of his work. When he enlisted in the Air Force and was not permitted to use initials as his first name, so he became John R. Cash. Eventually when he’d sign his first record deal, Johnny Cash became the official stage name.

Johnny formed his first band, The Landsberg Barbarians, while he was stationed in West Germany with the Air Force as a morse code operator. When he was honorably discharged, he and his then-wife moved to Memphis, Tennessee where he sold appliances and studied to be a radio announcer. Johnny still played guitar though and was working on music as well. His first studio album came out in 1957 and Johnny never looked back.

Today I’m listening to the iconic I Walk The Line which hit shelves in June of 1964. For perspective, this was his nineteenth studio album in only seven years—something that would be unheard of by today’s standards. It would take three years before the album would have a gold certification, where amazingly it still sits today. Two singles were commercially released—but they aren’t the tracks you’d guess. This album has some of his most iconic singles, but for some reason, they didn’t get major radio play back in the ‘50s. Fast forward to 2022, and the title track and “Folsom Prison Blues” are staples across any classic or country station.

What can you say about Johnny that hasn’t already been expressed in the millions of documentaries or movies made about his life? He made nearly one hundred albums and sold millions of albums. Johnny essentially invented the collaboration not only with June Carter, but pretty much every notable artist in music during the height of his popularity. He was an outlaw, big into drinking and doing drugs. In spite of all his demons, he would always make sure to put on a great show for anyone with the fortune to see him live. Johnny had a knack for music others didn’t possess at the time. Take the monster hit “Ring of Fire” as example. That wasn’t his song, but his version added the mariachi-style horn arrangement making is something totally different. And why? Because it came to him in a dream. There was something about his style and talent and personality that was truly original, and it’s what made him the greatest of all-time (at least for this music fan).

Seven hundred words isn’t nearly enough to talk about a legend like Johnny Cash—the best I can close this with is pleading with you to listen to his music. It sure seems his legacy is standing the test of time but keep on passing his music along to generations to come. It’s some of the best there ever was, with all artists who’ve followed needing to meet an insanely high bar. Happy Tuesday!