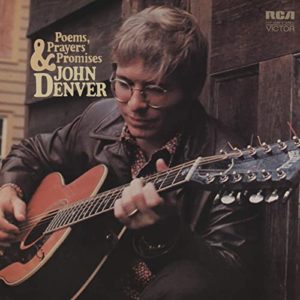 Imitation is the sincerest form of flattery, so they say—and in the case of music, I couldn’t agree more. I could probably do a whole post on covers and how much I love them, but maybe another day. Recently I came across a cover of one of the most iconic songs ever, and it made me think to go back and listen to the original artist—and here we go!

Henry John Deutschendorf Jr was born on New Year’s Eve 1943. Dad was an Air Force pilot, so Henry was born in the peculiar town of Roswell, New Mexico. His father was somewhat of a military celebrity after setting three speed records in the B-58 bomber. They moved around a lot and Henry had a hard time making friends. He felt like he was always the ‘new kid’ and being an introvert, he never felt he was in the “right” place.

Upon moving to Tucson, Arizona, Henry became a member of the boy’s chorus with the city. At age 11 he received an acoustic guitar from his grandmother, but never took any lessons—only learned through practice. Though he loved Arizona, they continued to move around the county, landing finally in Fort Worth, Texas. He disliked high school so much he drove his father’s car to California to visit family and begin a music career. Dad wasn’t on board, so he flew to retrieve him and forced Henry to come home and finish school.

When Henry decided to officially give the music biz a go, the first thing he was advised to do was shorten that last name. Henry adopted the last name “Denver” after the capital of his favorite state. Also preferring to use his middle name, John’s stage persona was born.

He joined a band in the mid ‘60s while at Texas Tech University but didn’t see much success. That changed in ’69 when he moved to California and signed with RCA Records on a solo deal. Sales on the first few records were slow, until the release of Poems, Prayers & Promises in April of 1971, his fourth studio album. Everyone involved had a gut feeling about a certain single called, “Take Me Home, Country Roads”. It would go on to peak at No. 2 on the singles charts despite the first pressings of it being distorted. His producer contacted several cities, starting with Denver—lobbying to get the songs on regular radio airplay. Response was so feverish they invested in reissuing the album across the U.S. with a corrected popular track. The album and all the work behind it launched John’s career, seeing him flourish in almost everything he touched over the next decade.

You’d probably be hard pressed to find someone who hasn’t heard a few John Denver tunes in their lifetime. But if somehow you missed out on him, he’s about as stereotypical folk rock and singer/songwriter from the ‘60s as it gets. This album is John strumming the guitar, using that talented vocal to draw you in. It’s not full of pomp and circumstance—it’s music for people who love to sit on the porch in their favorite chair and drift away with their toes tapping.

And did I mention I enjoy covers? Denver has a couple on here including a modestly successful band called The Beatles and their iconic track “Let It Be”. He also shows his take on a beyond popular James Taylor tune, “Fire And Rain”. John would go on to sell millions of albums over his career and win several awards, including two Grammys and an Emmy.

Sadly, his life ended far too soon when his plane crashed in California in October of 1997. There’s actually a fascinating story about John being the pilot and it being an experimental plane with various challenges in its setup, I’d encourage you to check that out sometime. But until then, give the album that put him on the map a shot today. It’s a cloudy day here in Wisconsin, but a little John Denver is sure to put a little sunshine on my shoulders. Happy Tuesday!