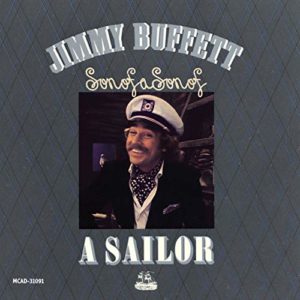 Iconic status and a cult following don’t always equate to mega sales—but performing in front of sold-out crowds night after night, year after year, does have its benefits. Today’s act hasn’t sold 100 million, but he’s been doing his thing through six decades, everyone knows who he is, and you know at least a couple of his songs. His outside music ventures have also increased his popularity, but it’s still all about the tunes.

James Buffett was born in Mississippi in December of 1946. As a child he played in the elementary school band and got hooked on music by playing trombone. His grandfather was a sailor so James was exposed to sailing and island culture at a young age. He attended Auburn University and picked up a guitar for the first time during his freshman year.

Jimmy’s humble professional beginnings in the late 1960’s were all about country music. You could frequently see him in Nashville or New Orleans belting out the latest country or folk rock standards. It was 1971 that saw a monumental life moment for Jimmy and his career. A fellow musician took him on a trip to Key West, Florida for an expedition. He fell in love and decided to move there and establish an entirely new identity. He began to go for an easy-going beach-bum persona, being very laid back and focused on playing coastal music people at the bar could jam to.

Buffet’s island vibe hit an all-time high in 1977 when the single “Margaritaville” was released. It was that point in history where everything for him and his fans (affectionately now known as Parrotheads) all came together. That hit was so huge, he didn’t know whether he’d be a one-hit wonder until he released a follow-up album—Son Of A Son Of A Sailor—in March of 1978. It skyrocketed to #10 on the Billboard 200 and #6 on the Country Albums Chart. To date, it’s sold over one million copies in the U.S., with maybe another million around the world.

Backed by the perennial concert favorite “Cheeseburger in Paradise,” the record has maintained its following for over forty years. And if you’re not familiar, the track would spur Buffett’s entry into the restaurant industry as he’s since opened a chain restaurant of the same name. You’ve probably been living in your van down by the river if you haven’t heard a few of his classics, but his style is incredibly unique—and this album exemplifies that style perfectly. It has a total jam-band feel and you might as well be feet up on the beach somewhere listening to it.

Buffett himself has referred to his music as “drunken Caribbean rock’n’roll.” In 2015 he spoke at the University of Miami’s commencement ceremonies and received his honorary doctorate in music. Staying true to character, he spoke wearing flip flops and aviator sunglasses. (And if you happen to be sipping a LandShark Lager while reading this, that’s a cooperative project between Anheuser-Busch and Buffett’s beer label, Margaritaville Brewing.) From video games, to real estate and record labels, Buffett has a finger in seemingly every pot he can. Jimmy has toured more or less every single year since 1976 and hasn’t expressed a strong desire to stop. Simply by happenstance, he’s currently embarked on the ‘Son of a Son of a Sailor Tour through 2019. Twenty-seven studio albums, 14 live albums and approximately 20 million sold, Buffett has definitively earned his legendary status.

If you like country, folk rock, pop, or simply being on an island, Jimmy Buffett has something for you. This is a great place to start in his catalog if you haven’t listened to one start to finish before. And for $7 bucks, how can you beat that? I like to listen to mine with lettuce and tomato, Heinz 57 and French fried potatoes. Happy Tuesday!