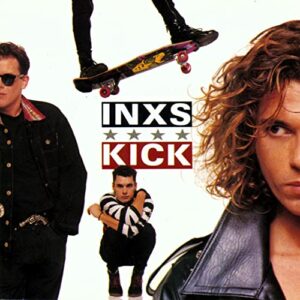 Certain eras of music can be a bit polarizing. If you lived through the craze of ‘80s new wave or synth rock, you may have a fondness for it. If you didn’t, you look back on it almost with a sense of humor with how silly some of it was. Today’s featured act is hardly a joke, with tens of millions of albums sold and forty years of making solid tunes.

Andrew Farriss convinced his fellow high-school classmate Michael Hutchence to start a band in Sydney, Australia back in 1976. They were calling themselves Doctor Dolphin and the group included two additional classmates, as well as two others from a nearby school. Over the next year, they’d shed players, add guys, and keep tweaking the lineup. Finally in 1978, when two member’s parents moved to Perth, the rest followed suit. The new group went by The Vegetables and it was a disaster.

Ten months later they went back to Sydney, had a total happenstance meeting with a music manager, and began backing the more popular group Midnight Oil. Their new manager thought they should change their name and switch to Christian rock. One suggested name was INXS—a mashup of two other popular bands at the time. They kept the name but rejected the switch of genre. INXS’ first gig was in ’79 on an ocean front beach in Umina. They also got another new manager and a five-album deal with a local indie record label.

With their debut album coming out in 1980, INXS has a solid following in Australia. Each of their first five albums went at minimum Gold down under, but it took a few years for their buzz to catch on in the states. Their influence on American music history became undisputed when they released their sixth studio album entitled Kick in October of 1987.

The single “What You Need” off their prior album was hot in the U.S., and the label wanted to them to capitalize. Their mission was to come up with an entire album of songs worthy of being singles on the Billboard 200. A lofty goal that was destined to go unfulfilled, as only five of the twelve tracks off Kick ended up being commercially released. The whole album, however, did navigate its way all the way up to No.3 though and spent 22 consecutive weeks in the top 10 here, with 79 weeks total on the chart—and was in the top ten in four other countries as well. Within just two months of release, the album was certified platinum by the RIAA, currently with ten million copies sold in the U.S. alone and an astonishing 20 million worldwide.

What made this so unique from being quintessential ‘80s? You have so much influence here, from Rolling Stones-style rock, to punk, funk with even a little dance-pop hybrid. What we know call “rhythm rock”, INXS was sort of the pioneer of that style. It was supposed to be influential rock and roll, but something that would also get your toes tapping. And that Stones comparison, if you close your eyes and just listen to the vocal, you’d swear Hutchence was Jagger on a few tracks. Songs like “New Sensation” are standards on various rock channels to this day, a real tribute to the lasting legacy of this seemingly random ‘80s record. While they may not have ever become the household name upon leaving Australia, their sales and list of accolades speak for themselves.

INXS kept making new music through 2010, never quite capturing the same success they did with Kick. They finally called it quits in 2012, after hosting a TV reality show to replace the lead singer. Don’t be afraid to relive the ‘80s today and give Kick a shot. I told you that we could fly; ‘cause we all have wings, but some of us don’t know why. Happy Tuesday!