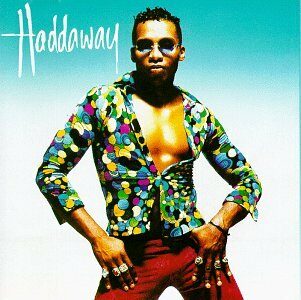 Some things are certainties: death, taxes, and if you want to boost the vibe at your party, toss on some good music. So long as people want to have fun, there will always be a place for dance music. It’s very interesting to go back in history and hear the differences between what people danced to then vs. now. Today’s featured act created one of the most iconic dance hits of all time, but what about the rest of his catalog?

Nestor Alexander Haddaway was born in Trinidad and Tobago in January of 1965. His mom was a nurse and his dad was a marine biologist. When his parents separated in the early ‘70s, he went to live with his dad in Europe, but then moved to be with his mom in America. Nestor ended up being raised in Chicago as a young child and then moved to Washington DC around age nine. His dominant musical influence was Louis Armstrong of all artists, which led to a love of playing the trumpet. Nestor was involved in the marching band, where he formed relationships strong enough to start a group of his own. Upon completing high school, he felt fairly directionless. In 1987, he decided to pursue pre-med in school, but found he wasn’t excited about it. Then he moved to Germany to work in bars, and later started his own business organizing fashion shows and photo shoots. It wasn’t until the ‘90s he opted to turn to music as a career.

While in Germany, Nestor was signed to Coconut Records. Going by the stage name Haddaway, he released a debut single titled “What Is Love”. The response was remarkable, becoming one of the most popular songs in all of Europe, reaching number two in Germany and the U.K. When the single sold a million copies just in Germany, execs felt we needed to hear it in the states. The success was no fluke, as the single reached number eleven on the Billboard Hot 100. Because the single was on fire, Coconut wanted to get a full-length album out right away. The Album (actual title) hit shelves in May of 1993. Four singles were released commercially, but none with the same punch as the first. Regardless, he was becoming a staple in the Eurodance genre and was selling millions of copies in several countries. It is certified in ten different countries, which doesn’t include the U.S. even though it appears to have sold nearly a million copies here as well. Most of the traction here likely came from the SNL skit, turned movie, where the Night at the Roxbury characters infamously dance humorously to the tune.

Music in a specialized genre certainly isn’t going to be in everyone’s wheelhouse. But if you sit back and think about situations where music like this would be fun to hear, it’s easy to understand why dance music will always have a place in the world. If you’re at the club, it’s going to get everyone up and moving. If you’re in the car on a long road trip, it can make hours feel like minutes. We’ve talked about a few other similar artists before, and I’ll need to give Haddaway a bit more time on my headphones before I decree where he sits on my dance music Mt. Rushmore. On the surface though, he feels a bit one-hit wonder-y. This album has some variety to it and is certainly not all dance music. The hits that bang are legit bangers, but it slows down in spots and has almost an R&B feel. Fatboy Slim probably still is the standard bearer on my playlists, but if you have others that compete, let me know!

Nestor is still out there doing it at nearly sixty years old. The lead track is featured in ads and film to this day and he has dabbled in acting and Broadway. None of his five other albums made any real noise, but I look forward to trying them out as well someday. Until then, what is right? What is wrong? Give me a sign!