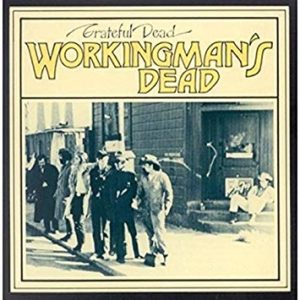 The most popular and iconic acts are typically those that top the charts over and over (and over) again. Today’s featured band might have had a hit or two, but is better known for being an eclectic, live jam favorite and an inspiration for so many younger artists.

In 1965 a band called Mother McCree’s Uptown Jug Champions broke up, and the remnants formed a group called the Warlocks. They played a pizza parlor and a small park in May of ’65. They’d keep chugging along until finding out Velvet Underground put out an album called Warlocks, so the name Grateful Dead was born—a name now in music history (which was found simply by picking up a dictionary). The stories range, but basically Jerry Garcia picked up a Folklore Dictionary thinking it was an actual one while on psychedelics.

The Dead got their start basically with the support of friends—one stepped up to manage them and another set them up with a house in Los Angeles and supplied them with sound equipment. Their first major performance was in the Avalon Ballroom in San Francisco in ’67. They played with some major names like Janis Joplin and Moby Grape—with all proceeds going to the Hare Krishna temple. The performance got them a deal, and their first album dropped the same year. Through 1970, they’d put out four studio albums, each increasing in sales and in overall popularity for the band.

Today I’m listening on their fifth studio release Workingman’s Dead which came out in June of 1970. This and their sixth record were recorded back-to-back and marked a significant departure for the band. They eschewed the psychedelic experimentation rock a bit, and instead focused on Garcia’s styled songwriting. The recording process itself was a mess. The band was in debt from the previous record, they’d been busted for drug possession and could have been facing jail time, and their manager was refusing to book them new shows.

The recording was done in three weeks and focused heavily on a folk rock feel, with elements of country in it. Garcia picked up a steel guitar while doing a show in Boulder, Colo. a year earlier which is featured all over the album. Many songs also feature layered vocals new to Deadheads. The effort worked, as it was voted the best album of the year by Rolling Stone and would later be marked #262 on their 500 greatest albums of all-time list. It was their first album to go platinum in the U.S.

Grateful Dead is simply one of those bands that everyone knows. Even if you aren’t sure you’re a big fan of their music and can’t name a tune, you know the name, and probably someone who enjoys them way more than you’d expect. When you pick up one of their records, you’re in for a ride. This one in particular has such a command, not unlike many folk acts of the time. But the Dead were something different. Garcia’s vocal and style is almost addicting, and you want to keep listening to more. Songs you think you didn’t care for, you end up singing later in your head. It’s like Americana rock meets folk with a little bit of country and soul. What they were doing was unique, and it’s easy to understand their absolute cult following to this day. Maybe similar to a Dave Matthews Band, people that go to their shows don’t miss a show. Ever.

After Garcia passed in 1995, the band’s shows were sparse until 2015 when they created a new grouping. Calling themselves Dead and Company, technically they’re still out doing their thing—but nothing beats the Garcia classics, so give this album a shot today. Working man, retired, in school—this one sounds good no matter what station you’re in. Happy Tuesday!

Marvelous movies arrive on TDS TV On Demand
Who is TDS?