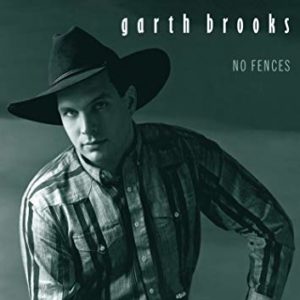 …..and we’re back! Hopefully everyone had a lengthy, relaxing holiday listening to lots of music! I know I did, and I definitely picked up on a few new groups I’m excited to share with everyone in 2019. But for today, an absolute classic to start your New Year right.

Troyal Brooks was born in February of 1962 in Tulsa, Oklahoma and grew up in Yukon about two hours away. The youngest of an oil employee father and a country singing mother, Troyal seemed destined for performing at a very young age. It was the second marriage for mom and dad, so Troyal has four older half-siblings and one full sister. The family hosted talent nights and all of the children were required to participate. Troyal would sing but also learned to play guitar and banjo as a child. As he got a little older, however, performing took a back seat to athletics.

In high school, Troyal played football and baseball—even dabbled in track and field. He received a track scholarship from Oklahoma State University where he would go on to compete in javelin. He graduated in 1984 and struggled finding a career so he turned back to the childhood standby: performing. He began singing and playing guitar in Oklahoma clubs, notably those near his old campus in Stillwater.

Exposed to all sorts of music, his major influences were rock and country. While he was discovered nearly immediately, it took Troyal a couple years to decide to go by Garth and make the move to Nashville. His first album dropped in 1989 to significant acclaim—but it was his second record, No Fences that really put him on the map.

Released in August of 1990, the record would reach #1 on the Top Country Albums chart, and #3 on the Billboard 200. It would stay within the top 40 for 126 weeks which is no small feat. Sales were quick and furious, having sold to date, wait for it—17 million copies in the U.S. alone. It was Brooks’ first record released in other countries, going platinum in half a dozen locations. The single “Friends In Low Places” became a country music staple all over the world, and is heard at every bar, wedding and social gathering south of the Mason Dixon on a daily basis to this day. Four singles would chart over the course of 1990 and 1991, and “Wild Horses” was reissued as a single in 2000, and reached #7 on the country charts in 2001—that’s some incredible staying power.

Make no mistake; Garth Brooks has reached unquestionable legend status. In spite of his relatively low output (only 10 studio albums since 1989), he remains one of the biggest live draws all over the world. His first three studio recordings have sold well over 60 million copies. He’s currently embarked on his ‘Stadium Tour’ and will continue that all through 2019.

From a style perspective, I’m sure you’ve heard Garth at some point in your life. He’s country through and through. This particular record may define country music for the rest of time and it certainly sets the bar high for any other artist. Over the years, he’d introduce a bit more rock into his country, and that did nothing but increase his likeability and popularity. The Recording Industry Association of America states he’s the best-selling solo albums artist in U.S. history, even ahead of Elvis and only trails The Beatles in total sales.

If you’re somehow not part of his hundreds of millions of albums sold, go ahead and give this one a go today. It’s practically a steal at $7.77 for the physical CD (and only a smidge more for the MP3). Even if you’re not the biggest country fan like me, it’s solid start to finish. This album definitely isn’t the same old story, in fact, it’s part of iconic country music history.