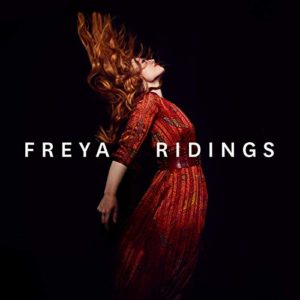 There’s nothing more exciting about learning about a new artist—especially a truly new to the industry artist. Sure some of them end up being total busts, but when you spot someone who appears on the brink of making it big, it’s a very fun thing to hear the start. Today’s featured act is just getting her feet wet, but seems poised for big things.

Freya Ridings was born in 1994 in North London. Dad was a fairly well known actor (Richard) in England, known for his portrayal of Alan Ashburn on the television drama Fat Friends on British free-to-air network ITV. Beyond that role, his filmography could fill up even the longest of pages, so Freya had something major to live up to.

Since Richard dabbled in music as well, Freya learned guitar from watching him play around when she was a child. Since she had some interest and talent, she changed to the BRIT School at age 16 to really focus on the arts and performing. In addition to honing her instrument skills, she focused heavily on her vocals—which would end up becoming the signature aspect of her music. At age 23, Ridings released her debut single “Blackout”, which started to generate a small amount of buzz. The second single “Maps” would drop a month later, followed up by her first EP—an album of live songs from St. Pancras Old Church in Central London.

After that release, Ridings began touring around the U.K. She would support a variety of bands, including the well-known act Tears for Fears. In November of 2017, it would be the release of single “Lost Without You” that would finally get her on the charts— peaking at #9 in the U.K.

That popularity was enough to get her signed to a label and begin working on her debut album. The self-titled effort would go on to release just a few months ago, in July of 2019. Even before the release, Smooth Radio referred to it as one of the top albums to look forward to of the year. The showing was strong, starting in the top 3 of the U.K. charts and also tops in Germany and Ireland as well.

The album itself was written over a long period of time, anywhere from three to five years. It focuses primarily on themes of loneliness due to her rather isolated growing up years where, instead of sitting with friends at school lunch hour, she’d go into the music room and play piano. She felt she’d tell stories to the piano no different than how you’d tell stories to friends.

Truthfully, I don’t even recall how I got tuned into Freya. It was a while back, likely shortly after “Lost Without You” was released. I heard that voice and a powerful ballad that actually make you feel–partially because of how outstanding her voice is. I’ve always been a sucker for a great acoustic piano ballad though even though others may not feel so strongly about it. There are a couple more upbeat tracks here, but the album is mostly in a slowed-down mode. I guess you’d compare it to maybe a Coldplay or something, a band that does primarily ballads but occasionally mixes it up with an upbeat track with a little bass in it. Another easy comparison would probably be Florence + The Machine, since Riding’s vocal is probably as powerful (or close) to Florence’s. Riding’s certified platinum in the U.K. and Canada, with the same likely in her future here in the states as well.

Freya Ridings is just getting her feet wet and probably still figuring out the whole industry and making albums business. Having said that, this is a really solid start and definitely worth a listen today. Give new music a shot today; you may just be lost without it. Happy Tuesday!