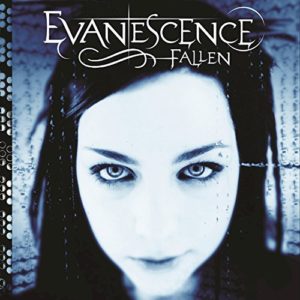 There is a standard list of iconic female vocalists out there, and it usually revolves around Whitney, Aretha, Florence and Mariah. Those women all had the luxury of being a solo performer, or at least having a band that was centered on the vocals. Today’s featured band has a lead singer undoubtedly as good as the ones above, but doesn’t seem to always get the accolades she deserves.

At youth camp in Little Rock, Arkansas all the way back in 1994, guitarist Ben Moody heard music in the distance. It was a Meat Loaf song being belted out by a woman playing the piano—he decided he had to go introduce himself and discuss forming a band. The woman, Amy Lee obliged, and the duo began performing at coffee shops around Little Rock. Needing a name, they played around with a few before landing on Evanescence, which means “disappearance” or “fading away” in Latin.

In 1998 they’d release an EP but could only afford to make 100 copies, and it was all live material. They’d release two more, one in ’99 and another in ’03 and, in the middle, self-produce a full-length demo in 2000. They began selling these at local shows, and with the latter versions containing new studio material, fans began to take notice—and so did record companies. In 2002 Wind-up Records was passed along a demo, loved it, and moved the band out to Los Angeles to be developed.

After much grooming and work, their debut record Fallen was released in March of 2003. The album was an unforeseen mega-success. One hundred and four weeks on the Billboard 200, seven million copies sold in the U.S. and more than 17 million worldwide. Lee’s booming presence behind the microphone would serve as their catalyst.  The lead single “Bring Me To Life” would end up putting the band on every major radio station throughout the world.

Some critics felt duped by the lead single being quite a bit different than much of the record, but that’s a bit short-sighted in my opinion. While other bands had done the nu-metal type genre before Evanescence, they were the first to do it with a female lead, and with a darker, more gothic type twist. The key selling point to most on the album is it’s not over produced. You hear the strings, the piano the choir in spots, it’s all real. Nothing was added later or over-dubbed; it’s one of the most real albums you’ll ever hear.

There was a bit of a controversy surrounding the album about a year after the release. Because of the clean lyrical content and spiritual undertones, many classified this is a Christian Rock record and band. Various Christian radio stations and music stores sold and promoted the album, which would lead to the band being critical of that label. After they requested to be removed from that description, the Christian community felt betrayed by the about-face. It certainly didn’t hurt sales of the album though, and most people (me included) didn’t hear much of the negative press.

Is this perfect? No, but for a debut album essentially creating a new genre, there are some really great tracks. The highs are music history and the lows are very forgettable. You can hear the band was still a bit raw, and the similar background tempo and beat on a few songs can be a bit redundant. That said, when you hear the difference between “Bring Me To Life” and “My Immortal” you can also hear they were on to something big.

They’ve released two albums since, neither hitting the same success of the debut. Albeit with different members, Evanescence is still going today, with another record due out this year. Maybe it’ll be great, maybe not—but this one is pretty solid, and for $5 bucks, you can’t beat that.

Bring me to Life, Evanescence, Fallen, Going Under, My Immortal