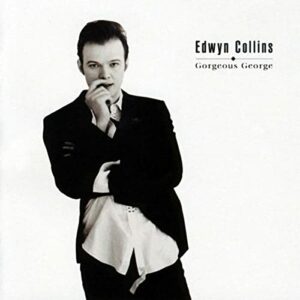 By Austin Krueger on November 9, 2021 in Online Life

I received another referral today from a tenured reader. Knowing I’ll be putting on a new record always puts some pep in my step—and although today’s featured artist is not entirely new to me, I’ve only heard one popular single. I’m anxious to hear more since that one single was arguably one of the biggest hits of 1995.

Edwyn Stephen Collins was born in August of 1959 in Edinburgh, Scotland. He lived in Dundee until age fourteen or so, when dad was hired as a lecturer at a college, and they were forced to move. Edwyn attended a now-defunct experimental school where new ideas were tried out by students and teachers alike. At age seventeen, he co-founded a band called the Nu-Sonics who, after a few years, changed their name to Orange Juice. Edwyn and a buddy founded their own record label called Postcard Records in an effort to get the band’s singles to the masses. Their debut “Falling and Laughing” received critical acclaim, but the single only sold two thousand copies. With three more singles released, Polydor Records took notice in 1981 and signed “OJ” to a deal. Inarguably, the band was successful in the U.K. and people began to notice Edwyn’s vocal talents. When in-fighting caused the refreshing breakfast beverage group to collapse, the world was his oyster.

Around 1986, Collins started his solo career signing to Elevation Records. While it wasn’t a well-known label, it had backing from Warner Music which meant if he struck gold with a single, it would have support. He released his first two albums in 1989 and 1990 respectively, but neither created too much of a buzz. The third commercial release titled Gorgeous George hit shelves in July of 1994, and Collins and Elevation felt like they had something different—and they weren’t wrong.

Guest musician Paul Cook from the Sex Pistols was featured on the record, giving the album an audience that maybe it wouldn’t have had otherwise. While the initial path to success was slow, in 1995 the single “A Girl Like You” was released and skyrocketed on charts across the world. Used as a featured track on the “Empire Records” soundtrack, you couldn’t go anywhere in late ’95 without hearing the famed Collins tune. It would also be used in 2003’s “Charlies Angels: Full Throttle”, earning Collins another nice royalty check.

What I love in particular about this recommendation is that it’s simply something I would have never crossed paths with. Sure, there was the big single, but I can safely say I didn’t know anyone who picked up the record so I never listened to more than the one song— and being so young at its release, I’m not sure it would have been music I’d have appreciated at the time anyway. This is very British folk rock, pop—with a bit of soul mixed in.

Collins’ talent is undeniable, as a singer, songwriter, and producer. When grunge and alt rock was dominating the music scene in the U.S. he came in and had a top-20 single with something that felt like it could chart during any era of music from the ‘60s through today. Because of his efforts, he won the Goldene Europa award for Best International Singer in 1995, the oldest German award for entertainers in existence.

Unfortunately, Collins suffered a cerebral hemorrhage in 2005 and required major surgery. While he never gave up music, some critics argue his performances were never the same. Perhaps someday I’ll listen to more and form an opinion of my own, but for today give this one a shot. While the lead single is sure to reel you in—the whole album is fun. It’s mid ‘90s BritPop with a soulful, atmospheric production vibe on top of it. Happy Tuesday!

FTC: This open season, is that really the health insurance you’re looking for?
We’re offering a new benefit for veterans