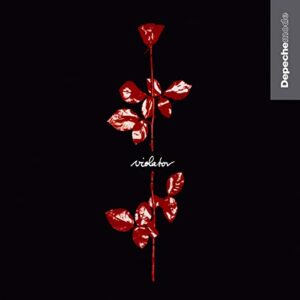 My TDS TV+ services came a new channel ‘MTV Classic’ that shows nothing but genre-based tunes by the hour. As I was working, “90’s Nation” came on and inspiration hit. Today’s featured band has sold easily one hundred million albums all-time worldwide but may not exactly be on the top of your playlists. Oh, and I haven’t talked about them before, so double win!

The origins of the band go all the way back to 1977 when schoolmates Vince Clarke and Andy Fletcher formed a band influenced by the Cure. While the duo went on to form and play in tens of other bands over the next few years, but in 1980 everything changed. Clarke heard a band whose output was electronic music and he knew he wanted to switch into the same style. The two took odd jobs to buy synthesizers and other needed equipment. They brought on a vocalist and the band known as Depeche Mode was born.

The name itself was taken from a French fashion magazine meaning ‘hurried fashion’, which would end up proving to be a mistranslation. Their first gig was at a school in May of 1980, which still has a plaque commemorating the event to this day. They would grab a deal, and their debut record would come out the following year.

Obviously since I was watching a show based on ‘90s music, you could likely deduce I’m skipping ahead a bit in their catalog. Today I’m listening to Violator, their seventh studio album that was released in March of 1990. While the band had seen some marginal successes the prior albums, it’s safe to say the expectations for this weren’t exactly over the moon. Thankfully, the band had grown bored of the prior approach, and went a different way in terms of preparation and sound. While they’d always been into the synth-pop movement, Violator marked their first time with an alt rock or maybe even punk feel to it.

Critically, it was a smashing hit. Critics loved the stripped-down approach to their music and loved the subtlety of the album. It was even referred to as a “compromise between pop music and something a little more sinister”. It would go on to hit #7 on the Billboard 200 and spawn two singles that would rocket into the top 10. It was the first album of Depeche Mode to hit a million in the U.S. and sits at roughly 15 million sold worldwide.

Depeche Mode is an example of a band that undoubtedly you’ve heard, but maybe can’t exactly place when you hear their tune in the middle of Target. At the time, however, they had a popularity that’s almost hard to convey today. A marketing campaign centered on the single “Personal Jesus” was huge. Ads invited you to call a phone number which did nothing but play the song. The band was so hot; they did a record signing in Los Angeles that ended in near riots after well over 20,000 people showed up.

Q magazine has called them “the most popular electronic band the world has ever known”—which likely isn’t an understatement. It’s almost shocking they’ve only been nominated for five Grammy Awards with zero wins. When I hear a song, especially one off this album, it’s really easy to understand what made them so cool at the time, they were different and had a sound that was quintessential ‘80s but getting into the angst that rocked the ‘90s.

Depeche Mode is still out there doing it to this day. I can’t recall seeing a notice about live shows recently, but they’re around. Their latest release was in 2017, but you can’t beat going back to a classic. This unquestionably qualifies for that designation. Go ahead and listen today and enjoy the sounds!

Refer a friend, get up to $450 a year!
Cheap Tunes Tuesday: Shinedown