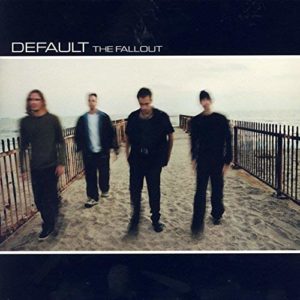 It’s always interesting when a band is huge in the moment, and then you fast forward a decade and they’re reintroduced into your life by random means, and you sort of wonder, “what happened to them?” That’s today’s band in a nutshell. They seemed to have the music business at their disposal but went into hibernation.

A group of guys were making music in their native land of Vancouver, Canada back in the late 1990s. They had been doing local shows for a very short time, tinkering with their sound when they struck gold. Nickelback lead singer Chad Kroeger (also Canadian) discovered the band when their demo tape was sent his way. Loving what he heard, Kroeger lent his support to produce their first and second albums.

Because of the backing of an established artist, the band—who called themselves Default—was on their way to getting a record deal. TVT, which would end up under the Sony Music umbrella, picked up the group and rushed them into making something. Default hustled into the studio and began recording tracks, including some that were already in the hopper, others they were writing and recording for the first time.

The debut album was titled The Fallout and was released in October of 2001. Wanting to capitalize on the very popular post-grunge movement, perhaps they threw it together a bit too quickly, but the fans didn’t seem to mind. Backed by the lead single “Wasting My Time” that hit major radio a month prior to the album release, the sales were initially solid. Comparisons to 3 Doors Down and Nickelback came easily, but a lot of this record tended to be just a bit harder rock than those similar acts.

Since Kroeger co-wrote a handful of tracks on the album, the Nickelback comparisons especially made some sense. Some critics viewed it as grunge music, but too watered down. Since I don’t think the grunge label is fair, those can be dismissed. It turns out it didn’t matter too much, as the record would hit top 50 status on the Billboard 200 and to date, sell nearly 2 million copies in the U.S. alone. It also achieved multi-platinum status in their home country of Canada as well.

I do recall this coming out and hitting the airwaves packing a major punch. After the lead single a month prior, the next single “Deny” didn’t hit MTV and radio until April of 2002. The video had a fun, four-minute boxing theme featuring Muhammad Ali’s daughter Laila. For a band that went from formation to record release in less than two years, this is a very solid effort.

Dallas Smith’s vocal is noteworthy, and you can certainly pick it out of a crowded room of rock singers. It’s certainly not in the Pantheon of music history, but start to finish, it’s very worth a listen. The three singles I’ll note below are beyond solid, and the rest gives you an easy 40ish-minute listen. The memory of the album lives on in pop culture, as many songs were used by video games, movies and even the 2006 World Junior Ice Hockey championships.

Default kept on truckin’ for about a decade after this record. While they never struck the gold this album did, they had a decent following. After taking a five year hiatus, they got back to it just this year and plan on making some new stuff and touring again. Keep an eye out for them, especially if you’re somewhere up north in Canada. Throw this one on today to help you seize the day. At $6 bucks, you can’t deny that type of value.

TDS donates mountain top in Vermont
Volunteer of the Quarter