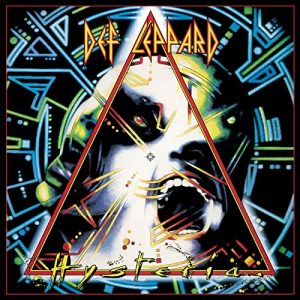 A couple weeks ago I wrote about ‘80s sensation INXS and the influence they had on the music business. That spurred some intrigue from one loyal reader, justifiably wondering why I’ve never talked about today’s featured artist. After all, they’ve sold well over one hundred million albums (you read that right) and counting.

Rick Savage, Tony Kenning, and Pete Willis were all students at Tapton School in Yorkshire, England. In 1977 they formed a band called Atomic Mass. Fellow classmate Joe Elliott missed his bus home one day and heard them practicing in the music room. He decided to check it out and audition on the spot for guitarist. Turns out his talent was better suited for lead singer and the band was in its way. Elliott’s only quibble? He didn’t love the name of the group.

In art class Elliot experimented with the name Deaf Leopard while designing some posters for gigs. At Kenning’s suggestion, the spelling was altered to Def Leppard to make it feel more punk rock. Although they underwent a few minor lineup tweaks through the late ‘70s, they began developing a following. They played mostly hard rock or heavy metal, and many considered them the leaders in the British metal movement. The group eventually got connected with the same management who represented AC/DC—and shortly after they got their first major record deal.

From 1980 through 1983, Def Leppard released three studio records. Each one became more and more popular. “Pyromania” in 1983 was a rocket ship to the moon, selling well over 20 million copies worldwide to date. You’d normally think I’d be focusing on that one, but unbelievably CTT-ers, they have an even more popular album. August of 1987 saw the release of Hysteria, Def Leppard’s fourth studio effort. The title of the album came from drummer Rick Allen. He used the word hysteria to describe the automobile accident that took his arm and the ensuing media explosion that happened the year prior.

The album consists of twelve tracks, seven of which were charting singles in the U.S. The first two tracks—both commercial hits to this day—are over 5 minutes long, something unthinkable to turn into radio hits at the time. Not only were they crushing it in the U.S., this release also solidified their standing in their home country as well. It was their first platinum-selling album across the pond as well as their highest-selling. In total, the album has sold nearly thirty million copies—putting it against virtually any album ever made in terms of sheer popularity.

Def Leppard has stated the plan was to make this a rock version of Michael Jackson’s Thriller—a full set of songs all to be made into hit singles. While this approach disappointed their dedicated heavy metal base, new listeners tuned in from all over the world (and apparently inspired people to buy their cassette tape or CD if they had the means).

Just about every source has this as a five-star record—and at the risk of sounding redundant, I certainly can’t argue with any of those critics. ‘80s music flat out isn’t my taste but my word, every tune start to finish makes you want to scream along to it in the car. If you’ve listened to music at all the last four decades, you know just about every song here—and every word to go along with it. While I may have chuckled a bit upon hearing the album suggestion, I’m not laughing at how many songs I’m going to add to future playlists. And if you’re still skeptical? The Ringer called the album, “the greatest hair-metal album ever made”. High praise.

This may have been the pinnacle of Def Leppard’s career in terms of sales, but they dropped another half a dozen albums or so and are still belting out classics today. Joe Elliott is still cranking out the vocal which makes them the rare ‘80s group with a clear, recognized lead. Pick this one up today, because love bites, love bleeds, it’s bringing me to my knees. Happy Tuesday!

Vaccination card scams
Masters 2021: A tournament unlike any other