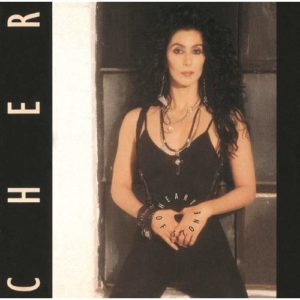 Music, television, film, variety shows—even folk rock spousal duos. Today’s featured artist has just about done it all and is still active six decades into her illustrious career. Add to that well over 100 million albums sold all time, and there’s no doubting why she’s considered Goddess of Pop.

Cherilyn Sarkisian was born in El Centro, California in May of 1946. Dad was a substance-abusing truck driver and mom was an occasional model and waitress. They divorced when she was only 10 months old and mom met an actor, whom she’d later marry and have another child. Mom would also become an actress and securing roles on film and television, often bringing her daughters along to play extras.

Cherilyn was moved all around the country and even left at an orphanage for several weeks as a result of her mother’s second divorce and various marriages. She took solace in performing, and starred in the musical Oklahoma! in the fifth grade. In 1961 her mom met a bank manager and Cherilyn had the good fortune of joining an affluent private school in Encino. While the class portion was a challenge, she was able to truly be herself on focus on her acting/singing chops.

At age 16, she began going by Cher and dropped out of school. She moved to LA with a friend and took acting classes. Shortly after, she met Sonny Bono who opened various doors for Cher’s career. As you probably know, they became a multi-platinum selling folk duo and eventually would marry. I’m going to gloss over a TON of things in her career and personal life, but she was consistently putting out solo and folk duo music.

Over time, Cher’s popularity waned and most thought her time was through—but in the ‘80s she made a musical comeback. While nothing in her solo career had seen great success, Heart Of Stone was released in June of 1989. It was her nineteenth solo album and the first to reach platinum status. To date, it’s sold over 10 million copies worldwide. It would spawn five radio singles and climb to #10 on the Billboard 200. Cher even embarked on an 89 show worldwide tour to compliment the record. Every single show was sold out and they grossed nearly $50 million.

Admittedly, I didn’t know much about Cher’s career before today. She has a significant disco catalog and sold almost 50 million albums with Sonny. She was making $300K a week to perform in Vegas in 1980—that’s how on top of the world she was. Add to that her comeback in the late ‘90s and she’s ended up being relevant in virtually every decade since she started. Going through a rough childhood, multiple marriages, the loss of a child and various health challenges, Cher has managed to keep going and has even returned to acting recently, and worked on a cover album for the band ABBA.

Her voice is absolutely iconic, even if you’ve only heard the hits like I had, once a Cher song comes on, you instinctively know it’s her. She’s won every major award, Emmy, Grammy, Oscar and a Tony and her 1998 track “Believe” was voted the world’s eighth favorite song by BBC in 2003. She’s also the only artist in history to have a number one single in every decade from 1960 through 2010—truly amazing.

She’s right up there with Michael Jackson and Madonna in terms of pop icons. I’d encourage you to give this one a shot today. At $5.99, it’s like we turned back time to offer amazing deals on some great tunes. Happy Tuesday!