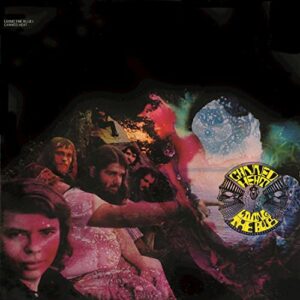 There are so many different eras throughout music history. Some of them ruled on an international level, others perhaps regionally in just the USA. Today’s featured artist helped define the hippie era in the late ‘60s and could be heard at any major festival during the time period.

Bob Hite had been trading blues records since being a teenager—his house in Topanga Canyon, California was a meeting place for people interested in music. In 1965 a group of blues fans at his home decided to form a jug band and start rehearsals. They would go through a ton of variations in their lineup, but in 1966 they found a producer to record their first unreleased album. They called themselves Canned Heat after a 1928 song “Canned Heat Blues” about a desperate alcoholic who turned to drinking Sterno—also called “canned heat” (the stuff you burn to keep food warm).

In 1967 they committed to a lineup and put out their first record. It was all remakes of classic blues standards. Their goal was not only to make music people enjoyed, but also to get people interested in the original artists. It reached #76 on the Billboard chart and got positive reviews in the Los Angeles Free Press.

Canned Heat (the entire band) was arrested for drugs in Colorado, then hit it big with their single “On The Road Again”—another cover. While those two things put them on the map, it wasn’t until November of 1968 until they’d really cement their legacy. Their third album Living The Blues was released, and would become one of the first double albums to actually sell well. Yet another cover, Henry Thomas’ “Bull-Doze Blues” was adapted into the song “Going Up The Country”—a single that would become no. 1 in twenty-five different countries around the world. It was a such a monster single; it was used as the unofficial theme song for the infamous Woodstock Festival the following year.

Critically, many wanted to pan the record. Blues wasn’t exactly “in” at the time and one track (on side two) was nearly twenty minutes long. Most writers felt this album would never work, but when it cracked the top 20 on the charts, it’s almost as though they were forced to write a more neutral review. Some referred to it simply being the right album at the right time—inferring that the band almost got lucky with all the success they saw.

They arrived to Woodstock via helicopter, something that wasn’t common at the time or at the festival. They were certified rock stars at that point, and their performance was adored by fans. While the blues genre may not have been all the rage—psychedelic rock was—Canned Heat was almost that perfect blend between classic blues and the long, trippy rock music of say a band like The Doors.

Funny thing about recycling music from decades earlier, it’s new to most people, so it’s like the first versions never existed. That wasn’t the intention of the band, but it helped them sell a lot of albums and book some of the biggest gigs through the ‘60s and ‘70s. To help remedy that lack of awareness of the original songs and artists, they actually booked tour dates with some of the originating artists and performed all around the world. Guys like John Lee Hooker and Memphis Slim saw increased record sales after performing with and dropping singles featuring Canned Heat.

These guys may not have the notoriety of some of the larger bands of the era, but if you ask many that lived through the hippie era, Canned Heat helped define it. “Going Up The Country” was more than a song, it was an anthem for millions of people looking to make a statement with their way of life. That’s pretty neat. Happy Tuesday!