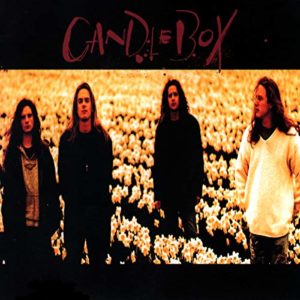 After writing about and listening to some lighter music recently, sometimes you have to cleanse the palate with a little old fashioned rock’n’roll. Today’s featured artist debuted and became a household name—but then faded into oblivion shortly thereafter. They recently came across my radio on one of the Sirius channels, and it transported me back to the early ’90s.

Lead singer Kevin Martin, guitarist Peter Klett, bassist Bardi Martin. and drummer Scott Mercado formed a band in November of 1990. They were based out of Seattle, Washington, and the grunge movement was about to explode in their backyard. In spite of not having a deal, they quickly became one of the most-requested bands in the area. Regularly playing Seattle’s top clubs, every promoter wanted these guys because their audience continued to grow and grow. Going by the name Candlebox, in ’92 they were on fire, and began hunting for a label.

The group hit the studios to record an eight-song demo and began dropping it all around town. Enter Maverick Records, who was still in their infancy as a company. None of the acts they’d signed had hit it big, so Candlebox was a little reluctant in the beginning. They were able to come to terms, and the band began working on their debut album.

Recording began at the London Bridge Studios in Seattle in early 1993. They had a couple songs, but started hammering out the rest. Not feeling overly creative on titling, Candlebox was released in July of 1993. Initial sales were slow, and early critical reaction was average. They steadily released singles in hopes to generate some buzz, and even threw together a few music videos for MTV since that was all the rage at the time.

Two videos would end up being on the ‘most requested’ list for MTV in 1993, but it didn’t convert to sales. One of those videos was even featured on Beavis and Butt-Head, one of MTV’s most popular shows in the era.

It was August of ’94 when a re-release of “Far Behind” hit major radio and the album skyrocketed. It moved into the Top 10 of the Billboard 200 charts and remained for 104 weeks in total. Sales picked up too and, to date, the album has sold over four million copies in the U.S. alone.

It’s easy to look back on bands like this and lament a relatively forgettable career, but this album is actually pretty legit. In the moment, it’s likely they just got lumped into another “Nirvana wannabe” group and discarded—but listening to it again today, it’s more than that. It has that alt rock, grunge vibe no question, but it’s sharp—especially Mercado’s drumming—and it truly sets them apart. Martin’s vocal is very solid as well, especially on the tracks that show a bit more passion. The gravely tones are at least something to differentiate Candlebox from other potentially derivative groups in the early ‘90s.

They played the main stage at Woodstock ’94 and they toured with some of the biggest acts in music history including Metallica and Aerosmith. They were a favorite of David Letterman and were featured multiple times on his Late Show. All in all it appeared they were destined for greatness.

Two more studio albums were released on Maverick, but they didn’t have the same success. The band split in 2000 after a major contract dispute with the label and came back in 2006. Currently, Candlebox is still out there touring and making music, but only Martin is left from the original lineup. They’re still pumping out harder rock, but you can always count on them for a mix of blues and grunge to this day. Give this one a go—it stands up pretty well to the tests of time. You and Candlebox may even blossom into a great friendship!