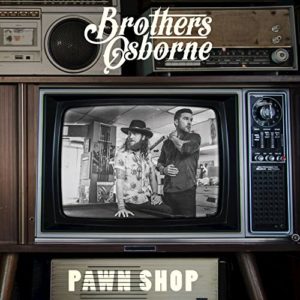 The negative about quarantine has been my overall music consumption has undoubtedly decreased. But out of that spins a positive: when I do listen, the amount of new music I’ve been hearing is through the roof. Since I’m not listening with specific intent recently, I’ll just toss on random playlists and have discovered some new-to-me acts.

John Thomas and Thomas John (TJ) Osbourne were both born and raised in Deale, Maryland on the western shore of the Chesapeake Bay. Their father is also named John Thomas and explained the simple name flipping was due to having nothing picked out and being distracted under pressure. When mom went into labor with TJ (John was already 2 years old) they were engrossed in an Eagles/Redskins game and that was as creative as they could be in that moment.

Dad was a big music nut, and the boys would sit back and play his records to pass the time. They would end up using his favorite acts as inspiration when they started to think about getting into the business themselves. As teenagers, they played a cover from a local band called Deuce and a Quarter during their high school “Battle of the Bands” in 2000. Despite being incredibly nervous, the performance went well, and their friends gave them positive reviews. After high school the duo moved to Nashville and sought a deal—which they’d find in EMI.

In 2013 they released their first their first single which reached the Top 40 charts. The second single the following year did the same, and the label had them release an EP of five tracks. From that effort yet another single hit the charts and the label felt enough proof of concept to go ahead and green light a full record.

Their debut album was titled Pawn Shop and was released in January of 2016. John and TJ co-wrote each song except one, and only two of the eleven tracks were duplicates from the EP. They brought in collaborative writers—and famed Lee Ann Womack makes a vocal appearance. Commercially it debuted at No. 3 on the Top County Albums chart and No. 17 on the Billboard 200. Selling a modest 21,000 copies in the first week, it now sits right around a million to date. Critically it was widely a success. Many praised the modern sound stemming from traditional country influences. TJ’s vocal is clearly unmistakable and gives some tracks a certain soul that some modern-day country lacks.

Since the band consists of two guys that are brothers, it’s easy to hear that chemistry on the record. I’m not saying it was easy, but the album sounds like getting in the studio and making music was effortless for the Osbourne bros. The songwriting is a big signature as well. It almost feels like every track could be a lead single and there aren’t any obvious duds.

That all led to some solid accolades. The album won five industry awards and both the Academy of Country Music and the Country Music Association awarded them Vocal Duo of the Year in both 2016 and 2017. Rolling Stone and Entertainment Weekly also have this in their top 10 list of best country albums of the year. Part of the album’s appeal as well is John playing more than 10 different instruments on the album. You can hear a banjo on one track and then steel guitar on the next. You’d almost swear it was a five-piece band and not just two brothers.

Brothers Osbourne is still out there making tunes today. Their last record released in 2018, but there are rumors another may be on the way. Whether you’re a country fan or not, I think you’ll find a couple tunes here for you. I think kickin’ the feet and tapping the toes is a great way to get through these strange times, and I hope you find a similar joy today. And hey, if you don’t—it ain’t my fault! Happy Tuesday!

Cheap Tunes Tuesday: The Verve Pipe
Finding a furry friend in the era of COVID-19