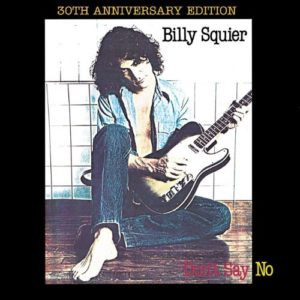 Rediscovering artists is akin to hearing fresh, new music sometimes. You forget a group that maybe you only heard in passing, or maybe even a band you loved years ago. Today’s artist came at suggestion from a loyal reader—this artist is one I’m familiar with, but can say with certainty haven’t listened to a full album in years, if ever.

William Squier was born in Massachusetts in 1950. While growing up, he played a little piano and guitar for fun, but never really took it all that seriously. Not necessarily an avid music listener either, he learned about John Mayall’s Bluesbreakers (featuring the slick guitar work of Eric Clapton) and was hooked. He took actual piano lessons for a couple years and eventually bought his neighbor’s guitar for $95. While never taking lessons for the latter, that ended up being the instrument of choice. William began playing local shows in Boston in 1968—the same stages he saw Eric Clapton play with the band Cream. He would start a couple bands, both with fledgling success. William thought he and his band mates could benefit from him attending Berklee College of Music in 1971—but his stint was brief and he found the allure of the rock star life too appealing to give up for years of studying.

Some of William’s band work garnered positive attention. The band Piper was hailed by critics and reviewed Squier favorably. Since the band was managed by the same group as Kiss, they got some major exposure—but ultimately William, now known as Billy, just didn’t see himself as a good fit. Capitol Records had enough faith in him to offer a solo deal, and his debut record was released in 1980.

Today I’m listening to the sophomore follow-up Don’t Say No which came out in April of 1981. Featuring hit single “The Stroke,” the album itself skyrocketed to the top 5 of the Billboard 200 and stayed on the charts for over two years, impressive for an act most people probably have forgotten about. The album would be certified Gold by the RIAA within three months and platinum within five. Another major music feat happened that year; MTV was formed in August of 1981. Squier definitely benefitted from being popular in the moment, and MTV putting his videos on consistent rotation. As of today, the album has sold over 5 million copies worldwide.

Billy Squier simply isn’t one of those names you think of when iconic 80’s rock comes to mind—and he doesn’t fit the bill of the hair metal, or the rock ballad standards classic to the era. I think that’s what makes his music so good—it was rock in a time when rock was a bit short on rocking. His studio work reminds me a bit of The Black Crowes or even early, stripped down Van Halen.

His next two records also would go platinum quickly, and Squier made a solid name for himself. Beyond that, his success was fleeting in the ‘90s and while he still tours today, the popularity isn’t like it was. He’s currently married to a former German professional soccer player and is an active volunteer for the Central Park Conservancy in NYC. He physically maintains 20 acres of the park, no small feat.

This likely isn’t in your rotation, and unless you’re somewhere in your forth decade, this may never have been. But either way, give Don’t Say No a shot today. Being 38 years old, the album holds up extraordinarily well, and you could convince me it came out yesterday. You could listen to it in the dark if you wanted, I wouldn’t say no.