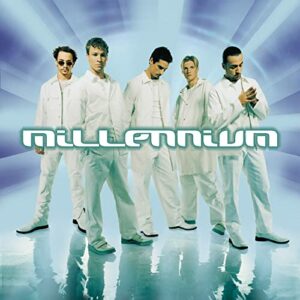 The bond between sports and music remains extremely strong—whether you’re referring to the band that gets you pumped up before the big game, or the amount of music you hear as a fan in the stands (perhaps even subconsciously). Today’s featured act isn’t new, in fact, their popularity waned about fifteen years ago. But almost every time I attend sports in person, the fact remains their songs have an impact an all generations.

Howie Dorough and AJ McLean were from Orlando, Florida and met each other because they shared a mutual vocal coach. Shortly after their introduction, they met Nick Carter through an audition. The trio realized they had exceptional harmony together and it seemed reasonable to start a band. Kevin Richardson and Brian Littrell were cousins from Lexington, Kentucky—but Kevin moved to Orlando to work at Disney World during the day and focus on music at night. In 1992, an audition was advertised in the Orlando Sentinel and around April of 1993, all of the aforementioned men were selected to be part of the group. The city had a “Backstreet Market” so the group ended up being dubbed the Backstreet Boys.

The new group’s first performance was at SeaWorld in May of 2009, and they continued to do local venues through the summer. In fall they shifted to touring schools, landing them a record deal with Mercury Records toward the end of the year. When John Mellencamp threatened to leave the label if they started getting into the “boyband business”, they were dumped, and Jive Records stepped in.

BB’s debut came out in May of 1996 to light fanfare and reception. Upon their sophomore release in 1997 the band started gaining a massive following—except in the U.S. Following an open-heart surgery for Littrell and litigation against their original manager, they began preparation for their third studio release titled Millennium. In April of 1999, the single “I Want It That Way” was leaked to radio stations as a tester for the album. Saying it was successful would be the understatement of the decade.

Millennium charted in twenty-five different countries and expectations for record sales couldn’t have been higher as a result. When it finally hit shelves on May 18th, it debuted at No. 1 on the Billboard 200 and would stay there for ten weeks. Over a million copies were sold in the first seven days and now it’s nearing fifty million worldwide to date—making it one of the best-selling albums in history.

Critically? What a polarizing album. To be fair, some of the criticism seems to be aimed at the entire genre of boy-band pop as a whole, not just the Backstreet Boys. Most of this music was referred to as “music of the moment”—meaning, the Backstreet Boys (or groups like them) wouldn’t have the staying power of say Zeppelin, the Stones or The Beatles. It was bubblegum pop for kids and tweens and nothing of substance. The best reviews would compare them to female pop icons like Britney Spears or Alanis Morissette—but they seemed to mostly skew the other direction. So here we are in 2021 and “I Want It That Way” gets the kids who weren’t even born when it was released pumped up and singing along at Camp Randall Stadium. Hearing 5,000 kids in unison seems to indicate it at least has some replay abilities.

To say this music either is or isn’t for you is generally true with any genre. If you like pop music, or anything you can merely sing along to in the car, you’ll enjoy this…maybe even more than you did back in ’99. Give it a shot today—your love may be affecting their reality, and that makes you, the humble reader, larger than life.