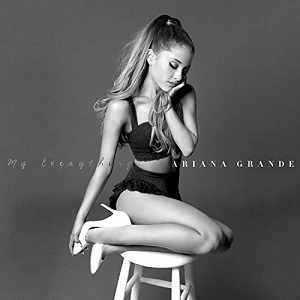 Pop music can be tricky. Sure, there are artists you know from TV and maybe even from movies, but that doesn’t always translate to their music selling a lot of copies or it even being good. Today’s featured artist is arguably the biggest pop act going right now and it is my first look into her music.

Ariana Grande-Butera was born in June of 1993 in Boca Raton, Florida. Mom is the CEO of Hose-McCann Communications based out of Brooklyn and dad owns a graphic design firm in Boca Raton. Her family moved to Florida while mom was pregnant with Ariana and her parents divorced when she was 10.

Grande got into performing at a young age, joining the Fort Lauderdale Children’s Theater. She played her first role as title character in Annie. At age 8, she performed at a karaoke lounge on a cruise ship backed by some of the most prominent orchestras in existence. Her first television appearance was singing “The Star-Spangled Banner” for the Florida Panthers hockey team. By age 13, Grande knew she wanted to pursue a career in music, but still concentrated on theater. She’d go on to star in the musical 13 on Broadway and in a Nickelodeon sitcom called Victorious. It was that role that cemented her teen idol status and would help make her dream of recording an R&B album come true.

Grande did some soundtrack work for Victorious and released an EP of some cover songs, but the show was cancelled in February of 2013. At that point, she got into the studio and put the finishing touches on an album that took three years to complete. It was an immediate success, debuting at number one on the Billboard 200. Today I’m listening to her follow up, My Everything, which was released in August of 2014.

Grande wanted the album to be “an evolution” from her debut, exploring more mature themes and genres. A myriad of producers and co-writers were brought in, some of the bigger names in the business to ensure its success. The prep work paid off, it would sell nearly 200k copies in the first week and officially debuted at number one once again. To date, it has sold over five million copies worldwide and remained atop the iTunes Store chart for nine weeks, making it the best-selling album for Apple in 2014. The effort would also earn Grande a Grammy Award nomination for Best Pop Vocal Album—in fact, over her career she’s been nominated six times and has won once. That last fact really sunk in for me.

Admittedly, up until now I have never paid too much attention to her career—but six Grammy nominations is a pretty big deal. And when I listen to this today, Grande’s dream of making an R&B record comes through—because it’s way more than just a pop record. And some of the producers and cameos on the album really take it up a level. I listen to enough and a wide enough range of music that I know a Zedd or Benny Blanco produced track when I hear it, and it instantly gives some cred to any artist. Then you hear some cameo masters like Big Sean or The Weeknd, and you’re transported from pop to an R&B/hip-hop hybrid. Vocally, she might be as talented as anyone you hear on the radio frequently. It’s probably not the deepest album of that year by any means, but it’s easy for a 20 year old to get lost in just trying to make an album that will sell a lot of copies. And by that goal, mission accomplished.

Grande has released five studio albums in total, all being certified minimum platinum in the U.S. In 2017 the Manchester Arena bombing occurred at the end of her concert. Grande has stated she suffers from PTSD from the incident and struggles with anxiety. Overcoming that the best she can, Ariana has maneuvered her way to the top of the current pop mountain. She continues to work with the biggest names and be one of the most streamed artists across all services.

Break free from what you think you’re going to hear and give My Everything a shot. At $8 dollars, the only problem is the next million copies it’ll sell. Happy Tuesday!