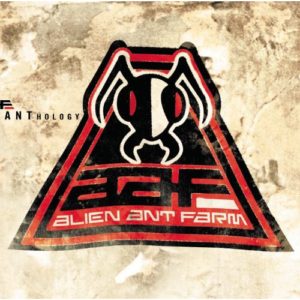 Music fans can be fickle—one day there is a band that they can’t live without, and then they can’t remember the band’s name two days later. While that is extreme, today’s featured artist was on nearly every high school or college playlist in 2001 and my guess is most people haven’t even Googled them in well over a decade.

In the middle of the 1990s a group of four guys formed a band in Riverside, California. In 1996 they recorded a five track demo titled the “$100 EP” which didn’t see much traction. Two years later, they did another short demo titled “Love Songs,” this time with only four tracks but with a similar result. After being advised that perhaps demos weren’t the way to go, they self-produced a full length album and called it “Greatest Hits” despite never dropping anything commercially.

With that album, the band would finally be recognized—and Alien Ant Farm would win Best Independent Album in the Los Angeles music awards in 1999. This success lead to work with other local groups, including Papa Roach who’d ask AAF to open for their upcoming tour. The relationship went so well, Papa Roach would help them get signed to their label, Dreamworks SKG.

Needing a big single to promote their commercial debut, they decided to try out a cover of Michael Jackson’s “Smooth Criminal,” but put their signature alt-metal sound to it. The result was a smash hit with the execs, and they felt it should be released immediately. It was leaked to a popular radio station and put out as a single without the band’s permission. Instead of kicking up a fuss, the band rearranged their promotion schedule and catered to the fans’ desire to hear the track. They made a video attempting to pay tribute to MJ as best as they could, and the band was on their way. The album ANThology would be released in March of 2001 and due to the mass success of the cover, has sold nearly 3 million copies worldwide.

Perhaps the rush to stardom was a bit quick for the band, who ended up putting out the 13-track album in a bit of a hurry and maybe didn’t focus very hard on the quality. But the album saw major push throughout 2001, spawning a second single later in the year, albeit with significantly less buzz.

They’d hit the studio again for an early 2003 release, but didn’t quite have the lightning in the bottle a second time. To date, they have five total albums, the most recent released in 2015. AAF still tours and puts on shows throughout the U.S.—just not nearly with the following they had in the early 2000s.

Going back to ANThology today has been a fun listen though. That alt-metal sound was so revolutionary in the day, and bands like Linkin Park or Incubus have their place in history because of that dramatic shift in alt-rock. While I wouldn’t argue ANThology should be at the top of your album selection list in a regular basis, it’s certainly a good listen, featuring a unique sound and solid vocals from Dryden Mitchell.

Even the most die-hard Jacko fans will enjoy this cover if you haven’t heard it before. It’s a fun twist on a classic that deservedly put Alien Ant Farm on the map. This is worth the $5 bucks today to remember what was and what could have been for a group of young fellas from SoCal.