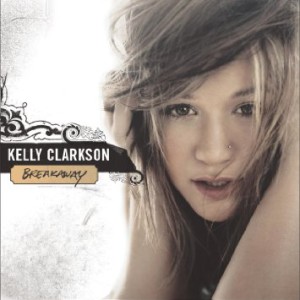 As they say, all good things must come to an end. After fifteen seasons, American Idol will end after declining ratings. Thousands of artists got a chance to make it big all from a simple audition in a sports arena all over the U.S. Choices of winners aside, it was a great platform to showcase your talent, and maybe get a single on the radio. Today’s artist got it all started, way back in season one.

Kelly Clarkson was born in Fort Worth, Texas in 1982. Having parents that divorced at age six, her two siblings and two half siblings were often split apart, living in different homes. She was raised with a very religious background, but unlike so many before her, the start in music didn’t come from a church choir. While Kelly was in the seventh grade, her school music teacher overheard her singing in the hallway. The teacher implored Kelly to try out for the school choir—and was shocked to hear her admit she’d never gotten any formal training or coaching. In spite of that, Kelly would go on to be in school musicals and be a major attraction at talent shows.

She was offered full scholarships to University of Texas, North Texas and Berklee College of Music, but Kelly declined all of them, stating she just wanted to go out on her own. Working several jobs to finance a demo, she received little interest—the exception being offers from both Jive and Interscope who wanted to turn her into the next Britney. She declined both “opportunities,” instead moving to Los Angeles to find more success. Two appearances in TV shows and another demo later, nearly every label had turned her down. She had no choice but to move back to Texas, and find more odd jobs to make a living.

It was back in Texas her friend encouraged her to audition for the first season of Idol. In September of 2002 she narrowly won the competition and was immediately signed to RCA Records and cut a double single. The following week it went all the way to number 52 on the Billboard 100.

Today we focus on her sophomore album Breakaway released in November of 2004. Trying hard to shed the “Idol” image, she parted ways with her manager and worked with new producers and writers. The idea was to turn the album into more of a pop/rock record, with elements of soul. Her debut album was mostly pop with a bit of R&B mixed in. Critics responded positively to it, praising the change in style and her vocal abilities. It would go on to sell over 15 million copies worldwide and win two Grammy Awards. It stayed in the top twenty of the Billboard 200 for over a year, which is an amazing run.

Full disclosure: Kelly Clarkson’s music was never really in my wheelhouse. I have watched Idol over the years here and there, strictly because I love music so much. The focus on the next pop act is always a bit too much for me, and I generally end up tuning out. So listening to this today, it makes me want to give other artists more of a chance after competing on the show. The efforts here to not be the next pop star is incredibly noticeable, and it works. Unquestionably her voice is great and the album style is almost a blend of pop, the brash edge of Pink and the soul of Beyoncé. I think it’s one of those rare instances where the look and the background don’t match the substance—maybe like Ed Sheeran or Sam Smith. Where you pick it up expecting in this case, a bubblegum pop album and you get something so much more.

Give this Idol original a shot today and I think you’ll be surprised at the content just like me. For $5 bucks, that’s such a good price you could buy it twice and barely make a dent in your bank account.