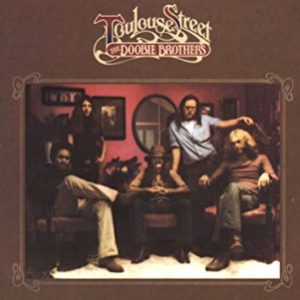 Band turnover can sink even the most popular and successful of acts. Once a key piece goes missing, the sound isn’t ever quite the same. In rare cases however, addition by subtraction takes place and the popularity skyrockets. Today’s band went through a major change a few years in, and  still managed to sell nearly 50 million albums worldwide.

Drummer John Hartman arrived in California to meet a musical influence. Upon doing so, they formed a band called Pud and started jamming. It wasn’t working well, so they brought in a couple more guys—Tom Johnston and Patrick Simmons—and began playing bigger gigs. Focusing on Tom’s vocal and Patrick’s fingertip guitar style, they began seeing success. They named themselves The Doobie Brothers thinking, “what a stupid name” and intended to change it after coming up with something better. That day never came.

Northern California ended up being their territory, and their gigs attracted local chapters of the Hells Angels. Taking on that persona, they were known for leather jackets and motorcycles – but the music was more up-tempo rock, one might even call it light. Either way, they could jam and put on a fun show, so their popularity continued to rise. They picked up a deal with Warner Bros and put out their debut in 1971. The album was a bit of a flop, and Warner expected significantly better results in the follow up.

So today I’m listening to that very sophomore release titled Toulouse Street which came out in July of 1972. They swapped out bass players and added a second drummer attempting to find a bit of a different sound. Their initial stuff could also be viewed as a bit country—this album seemed to focus more on the rock, pop-rock vibe. The album was clearly more polished, but some critics felt the changes were a bit eclectic, and not what you’d expect from a Doobie Brothers record.

Sales were solid, with the album going platinum in a little over a year, and the updated style was drawing a more diverse audience. The two following albums both went multi-platinum in the U.S. alone and the band credits this record for being the catalyst for not only them to continue on, but to keep up with the trends in the industry. While charting at only #21, two singles reached #11 and #35 on the pop charts, something the band never thought they’d accomplish.

Every era has their version of a ‘jam band.’ The Doobie Brothers would go out there and just whale on their instruments and get the crowds moving. Decades later, you step back and listen to their catalog and clearly they put together a very impressive set list. Three tracks off this album are featured on their ‘Best Of’ album, which alone has sold tens of millions of copies.

In 1975 Tom Johnston left the band and they poached Michael McDonald from the group Steely Dan. In a move that left many thinking the band would lose their mojo, instead they went on to sell even more albums and heighten their status as legends. There is no mistaking a Doobie Brothers tune when it hits the radio, regardless of who was on the mic. That signature quality has resonated with fans for five decades now, very impressive.

Having been a fan of these guys for a while, it was a treat when a loyal reader requested a review this week. I’d encourage more to reach out if there is a band you’d like to see featured. In the meantime, pick up Toulouse Street today for the criminally low price of $4.99. Toss it on in the car and you’ll be guaranteed to be rockin’ down the highway.

The Post, Maze Runner and Paddington coming to TDS TV on Demand
Look before you log in