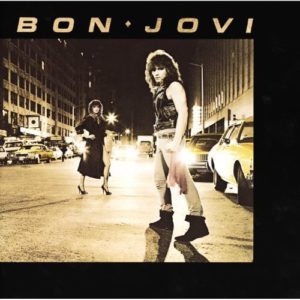 Thirty-five years is a long time to do anything, let alone the same thing. Generally, if you are able to stick it out that long and you’re relatively good at what you do, some recognition will come your way. Today’s band has certainly earned more than some having finally got their nod as one of the best in music history.

Back in 2015 I discussed a plucky New Jersey based band, and the album that sold over 28 million copies worldwide. Today, however, I’m going to focus on Bon Jovi’s earlier work, the stuff that put him and the band on the map.

Jon Bon Jovi knew he wanted to be a musician at a young age, but success eluded him for quite some time. After forming a handful of bands with different lineups, that one big break never seemed to happen for JBJ. From working at a women’s shoe store to a recording studio, he did everything he could to support the dream. But even after dropping demos off and working with major producers, the struggle took over half a decade. Once “Runaway” hit the radio and generated real buzz, the band was formed and they really haven’t looked back.

After hiring a new manager, they recorded their debut record simply titled Bon Jovi which was released in January of 1984. They truly had only been playing local shows, opening for more well-known local talent. The lead single would chart on the Top 40, and the album itself would peak at #43 on the Billboard 200. Mercury Records made major headway by latching Bon Jovi onto a Scorpions tour in the U.S. and a Kiss tour in Europe. They were being heard by a whole new audience, exposing those fans to a different brand of music as well.

A common misconception with this album is the track titled “Shot Through The Heart,” which 99% of the time is confused with “You Give Love A Bad Name” which would debut two years later. The consensus was Bon Jovi was off to a good start, but maybe lacked the star power to ever create something huge. Sales were a touch slow to start, but have reached roughly three million worldwide to date.

It’s always interesting to listen to the albums that got iconic bands started. In some cases, it’s their best work, others, it’s clear they were still figuring it all out. Today’s feature is probably the latter in my opinion—but that doesn’t mean it’s a bad record by any means.

Outside of “Runaway,” it simply lacks that radio staple the band could go back to 35 years later to encore Madison Square Garden. Truthfully, their first two albums were a bit slow and they had to reinvent themselves a bit for their third record or risk losing their contract. They did, and 130 million sold albums later, have turned into one of the most influential rock bands in music history. The music success has lead Jon to venture into acting, solo music, and even owning an arena league football team. In 2011, he purchased 15% of the Atlanta Falcons for 150 million dollars. Not a bad living for a rock singer.

In October, Bon Jovi was nominated for the 2018 Rock and Roll Hall of Fame inductions. Needless to say, that’s an incredible honor and the absolute peak for any band. Having recently toured the museum in Cleveland, being there is a shrine to all the hard work over 35 years. While this album may not be the unconditional standard in Bon Jovi history, it’s a great indicator of how they got started, and that’s a fun salute. Pick the album up for $5 bucks today, and start your own journey into the career of an iconic group.