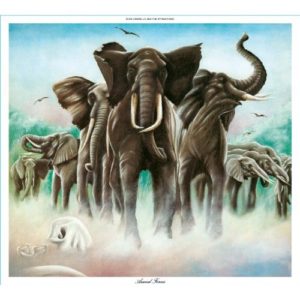 Is it possible to have an artist on 2004’s Rolling Stone’s 100 Greatest Artists of All Time list and not be able to name one of their songs? Put me down as “yes,” because I’ve heard of today’s featured artist, but can safely say I couldn’t identify a single track spanning a nearly five-decade career.

Declan MacManus was born London in August of 1954. His father was a musician and bandleader of Irish descent who got Declan into music as well. Declan’s father wrote and sang a song for a television commercial for R. White’s Lemonade, and Declan provided the backup vocals on the ad. The commercial would win a silver award at the 1974 International Advertising Festival.

In 1971 Declan moved in with his mother and started his first folk band. After completing college, Declan decided to take the music thing a bit more seriously and had a rock band called Flip City that toured England for three years. Around that time, Declan began going by the name DP Costello, honoring his father who had the stage name of Day Costello. In later interviews, DP indicated he also started going by the first name Elvis as a tribute to his father.

Beginning a solo act in 1977, Elvis saw very modest success with early singles. Despite being signed to CBS Records out of London, they never shared Costello’s work with their American counterpart. As a result, Costello was arrested for performing on the street outside of the London office out of protest that no U.S. record label had released his albums. A few months later, he was signed to CBS in America as well.

Today I’m listening to Costello’s third studio album, Armed Forces which was released in January of 1979. A reporter from the New York Post took to the album right away, reviewing it as a “killer in several senses of the word.” The album was known for brief, energetic tracks, with overly-clever lyrics that seemed to stick with you. Critics felt the detail and substance of this album was a significant improvement over his first two, and received nearly universal acclaim.

In reading about Mr. Costello this morning, there was a snarky article discussing how most millennials only know him for a brief appearance in an Austin Powers film. I’m not sure how much truth there is to that, but I can certainly say I’ve never sat down and listened to one of his albums start to finish before. I had no idea what to expect, and I’m pleasantly surprised on how upbeat and catchy the album is. Perhaps this record isn’t a full indication of his entire catalog, but Armed Forces is such a fun blend of synthpop, a bit punk rock, and a bit of new wave sort of wrapped into one. Some of the snappy tracks show their age, but generally speaking, you could easily mistake this for something that came out last week.

In total, Elvis has released over 50 albums and has sold over 20 million copies worldwide. He’s praised as one of the most influential artists in music history—and I only scratched the surface of his career in this post. It’s about time we all get acquainted with his work, and how better to start than $5 bucks?