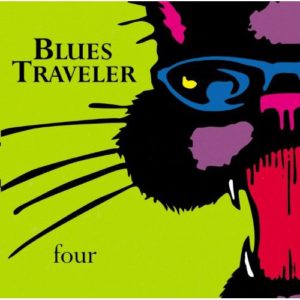 By Austin Krueger on November 1, 2016 in Online Life

When you think of musicians from New Jersey, one artist clearly pops into mind over all the rest. Yep, you know him, The Boss–Bruce Springsteen. If you’re a big fan of his, my apologies, but he is not the artist I’m listening to today. Instead, I’m focusing on another Garden State standout—a group that’s sold nearly 10 million albums in the U.S. alone.

Back in the mid-1980s, a band was beginning to form in Princeton, New Jersey. All-around musician John Popper, and drummer Brendan Hill, formed The Establishment with Hill’s brother on bass and a rotation of guitarists. Even though the fellas were all in high school, they produced a few cassette demos with original content. They had gained someone of a following because of their upbeat versions of slower classic tracks from artists like Van Morrison.

They would change their name to Blues Band, add a full-time guitarist, and together they had a legendary jam session held in one of their parents’ basement. Many of the songs would go on to be used on their first studio recording, and a black cat that wandered by the session would go on to be their mascot figure. They also decided their name may have been a bit too generic. Since they played blues and loved the movie Ghostbusters, they took inspiration from the villainous ghost “Gozer the Traveler” and Blues Traveler was born.

After graduating high school, all the members would go on to New York colleges, living in the same apartment together. They would do local shows, with A&M Records discovering the band at one and signing them to a contract. By 1990 all members had dropped out of college and devoted themselves full-time to the band.

Today I’m listening to their fourth release cleverly named Four, released on September of 1994. With the backing of the upbeat single “Run-Around” and catchy follow up track “Hook,” the band was seeing major radio play. The former song would even go on to win a Grammy Award and break a record for most weeks on the Billboard Music charts. With this success the doors began to open—they would play Woodstock ’94, open for the Rolling Stones, be featured in various television shows and movies, and be asked to perform in many compilation and dedication albums. Their unique upbeat style and feature of the harmonica made them a fun attraction for music fans of just about any age.

Having sold over 6 million copies in the U.S. alone, Four certainly has the chops to stack up against almost any record released during the time. While I definitely recall the headlining tracks, I’m not sure I had ever listened to this start to finish before. I will say, it’s not at all what I was expecting. A few of the songs are great jam songs, but they show range with a couple outstanding ballads—perhaps with a bit of a mix of that same harmonica flair that the peppier tracks utilize.

While almost unanimously fitting into the ‘rock’ genre on most sites, I think this particular album is a bit more. You get the obvious blues in spots, but then it’s also a bit folk rock and even soul or R&B too. It’s significantly more diverse than I thought and that was a really nice surprise.

After catching lightning in a bottle, a death in the band and Popper’s struggle with obesity curbed some of the buzz the band had generated. They’re still releasing new albums and touring—notably playing the famous Red Rocks Theater in Colorado every 4th of July. While I’d encourage everyone to take a trip out to Morrison, Colorado, pick this one up for $5 bucks today as a placeholder. I think you’ll be as happy with it as I am.

Savvy Saving: What #PrimeDay Taught Us About Shopping
A love affair with Countdown to Christmas: a confession and advice