Cheap Tunes Tuesday: The Presidents of The United States of America 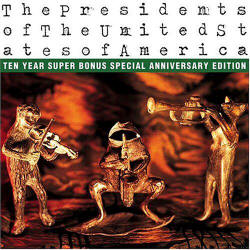 It’s been said many times on this blog, but early 90s Seattle was all about grunge music and the mentality that went along with it. Many bands without a measurable amount of talent made good money simply for making that brand of music. Instead of going with the crowd, today’s Seattle-based trio was doing things their way—regardless of what was big.

Chris Ballew and Dave Dederer attended a small private school together in Seattle. With fewer than 600 students and being a K-12 institution, it’s safe to say you got to know just about everybody. After graduating, the duo decided to write songs and perform in their garages.

Eventually, in 1993, they took their show into clubs, performing under various names without a drummer. Finally settling on The Presidents of the United States of America (an insanely long band name), they caught the eye of drummer Jason Finn and stole him from another group. They felt he had been the missing component, and decided to make a 10-track demo tape. They sold them at their shows and Finn also sold them from behind the bar he was tending at the time. They started to gain traction locally and began getting noticed.

The following year would bring a whole new experience for PUSA. They signed with a tiny label out of Seattle called PopLlama Records. Without having a ton of pressure from a large label, they weren’t in a huge hurry to rush something out the door. In March of 1995 they released their debut Self-Titled album, without much fanfare.

Fast forward to August of the same year, and behind the commercial release of the track “Lump,” the album absolutely skyrocketed up the charts. The sales were so intense for the small label; Columbia Records stepped in to handle distribution. It would achieve as high as #6 on the Billboard 200 and within two years would sell over three million copies. Critics were positive to the album as well, noting the novelty of catchy punk songs, instead of the normal angst ridden alt rock of the times.

This is a tough one to really put your finger on. It’s so unique, blending humor and self-deprecation with some really good guitar and drum work. I’m not sure I know anyone that has heard the track “Peaches” and hasn’t come away toes tapping and singing along. Their music videos were also intended to be fun, and didn’t have the over-production that was popular for big bands in that era.

By no means is this on the same scale as Nirvana or The Beatles—but boy is it just an interesting, easy listen. If you’re looking for some intense lyrics with a message, or something deep to force you to drift away in thought—this isn’t the one to pick up. But if you simply want to have the day pass by a little quicker, the riffs and beats of nearly every track will certainly have that impact.

The band has gone through several breakups over the years, but managed to release six studio albums. Sadly, none of them ever quite gained the traction of the debut, but we’ll always have it to remember the good ol’ days. You can’t really put a price on that type of nostalgia, but Amazon says it’s worth $5 bucks.