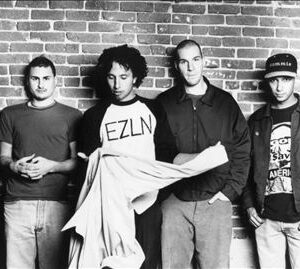 Good music can come in all sorts of forms. Some people really groove with artists that use heavy synthesizers, some have a favorite artist that exclusively uses an auto-tune device for all the vocals. Maybe your favorite modern artist makes their best music when sampling songs from the 60s and 70s. I’m not the type of person to criticize anyone’s path to success in the music industry, but today’s band certainly doesn’t hesitate to speak up.

The story started so simply, and as it did for so many bands before them—guys who were already part of different struggling groups looked for something better. In their case, four guys who were hungry for success left their current situation and formed a new band in 1991. The lead singer had previously written a song with a title always thought to be an even better name for a band. With all the new guys agreeing, Rage Against The Machine was born.

After giving a performance in the Cal State University campus, several labels expressed interest in signing the band. Eventually Epic Records was the label chosen, because they were willing to meet all the creative demands expressed by the band. Given the debut record would go on to sell over 5 million copies, it was a good decision.

I’m listening to that very debut album today, which is their Self-Titled record released in November of 1992. The initial reviews were definitely positive, but roughly a decade after the album was released, the incredible praise came forward. For no real reason, in the 2000/2001 timeframe, this album returned to the scene and started to generate more buzz. Full of 5-star ratings and all the acclaim you’d expect with a Beatles album, Rage started becoming a household name. It’s sort of an interesting popularity, given the band’s focus is really on activism and revolutionary political views. Their very identity to most listeners are those principles, being against the establishment and focusing on all the injustices in the world.

Personally, I like to put all those messages aside when listening to music. If you’re a real lyric hound, you’re probably going to stew on those here and it will probably put you into deep thought. But what I choose to hear on this album is a sound that was completely unique to the time. In 1992, bands weren’t coming out with this type of hard rock, combined almost a light fusion into hip-hop. Some are going to call it alt rock, and maybe it is a bit of that, but it goes so much harder than any other Seattle band in the times.

Rage prided itself on making real music, with guitars, drums and vocals. Nothing else. They felt so strongly about it, they even put notes in the liner of every album they made telling you so. For me, that true sound comes through, as does the passion these four guys had in making music they loved.

The messages certainly aren’t going to be something everyone agrees with, but from a music standpoint these guys were doing revolutionary things. To this day, no one has replicated the styling of Rage Against The Machine. Give this one a shot if you’re feeling like some heavy guitar, substantial rock music today and have a spare $5 bucks.

Blog editor comment: Note that not all the lyrics on this album are family-friendly…not that you’d expect them to be given the band is called Rage Against The Machine, but I thought I should say it anyway.