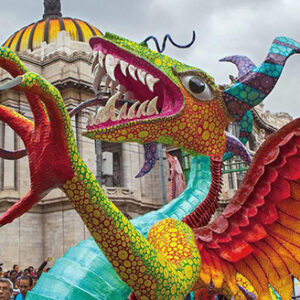 Celebrating the Day of the Dead

Today is the Day of the Dead (el Día de los Muertos), a significant Mexican holiday where families welcome back the souls of their deceased relatives for a brief reunion filled with food, drink, celebration, and a lot of laughs. A blend of Mesoamerican ritual, European religion, and Spanish culture, the holiday is celebrated each year on the first and second of November.

El Día de los Muertos is often known for the grand celebrations by locals and tourists hosted in Mexico’s southern states. Mexico City can be considered the hub city of the holiday, the home of many annual events and marvels like the Great Parade (complete with floats, troupes, and music bands), the Gran Ofrenda, and much more.

The holiday also means a lot to people in the northern states. IT project manager Rosario T. grew up in Parras, a small town in north central Mexico roughly 10 hours north of Mexico City. It was here where some of her fondest childhood memories were formed, celebrating Día de los Muertos with her grandparents, their 11 children and spouses, all her cousins, and her immediate family. According to Rosario, the festivities in her hometown begin the day before el Día de los Muertos Nov. 1, often referred to as “All Saints Day” or “el Día de todos los Santos.”

“On All Saints Day, we call out to all the kids who have died without the chance to live a full life,” said Rosario. “It’s a way to honor and remember them.”

Leading into Día de los Muertos, people in Rosario’s hometown pray, stay up, and celebrate until 2 or 3 a.m.

“We believe that during the night, the souls of our late loved ones come back and stay with their families throughout that night and the next day,” said Rosario. “We prepare their favorite dishes and place them on the altars.”

Prior to the holiday’s celebrations, families construct an altar—an essential component of the holiday. These altars are decorated and filled with ofrendas, which are offerings to the dead. The ofrendas often include the departed person’s photo, their favorite snacks, toys, personal possessions, candles, and an assortment of flowers.

Schools and workplaces also celebrate the holiday. Students work together to create altars and origami-like decorations for the classroom, and workplaces do similar competitions to award the prettiest one. 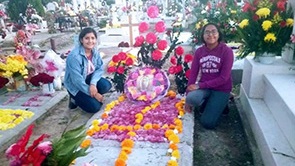 “A few years ago, one of my nieces passed away,” said Rosario. “My sister and my mother gathered pictures of her and some of her clothes and brought them to her school. The school did a contest to create different altars and honor her. It was very special for them.”

Another key part of the holiday comes during the Day of the Dead, when families in the Parras community gather for a series of events in the cemetery. These celebrations honor all lost loved ones in the family, and have provided some of Rosario’s greatest memories of the holiday.

“I have a very large family on my mom’s side,” said Rosario. “All my aunts and uncles would get together, and we’d have the rare chance to enjoy each other’s company. We could picnic, share stories, pray, and sing together.”

Rosario also mentioned how incredible the sense of community is between the city’s inhabitants inside the cemetery.

“Everyone in the city goes to the cemetery,” said Rosario. “It’s like a packed football stadium. People play music through speakers or play mariachi and sing together.” 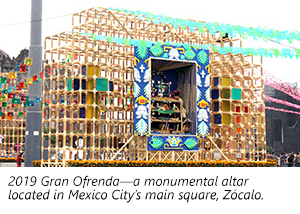 According to Rosario, el Día de los Muertos recognizes death as a natural part of the human experience—a continuum with birth, childhood, and growing up to become a contributing member of the community.

“The main thing is that Día de los Muertos is a celebration of life,” said Rosario. “There are times to mourn, like funerals, but this is a day to truly look forward to.”

While the overarching goals of the holiday are the same throughout Mexico, no two places celebrate the same way. System Maintenance Technician Juan G. is from the city of San Jerónimo Purenchécuaro—about four and a half hours west of Mexico City.

“Where I’m from, it’s a really special time,” said Juan. “There’s actually nine days of prayer and the whole community gathers together in joy on that day. Our family cooks together and shares stories about what our loved ones enjoyed. The Day of the Dead is about coexistence, artisanal art, culinary art, drawing, and enjoying the community.”

While celebrations across the country may look a little different today due to the pandemic, there’s no question that joy and celebration are still filling the air!

Top photo: One of the many sculptures displayed on Paseo de la Reforma, Mexico City’s famous avenue. This “albrije” is a massive magical beast constructed of paper mache.