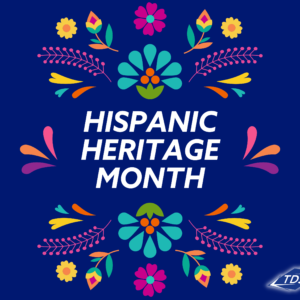 From September 15 to October 15, TDS observes Hispanic Heritage Month—a month celebrating the culture and history of Spain, Mexico, the Caribbean, and Central and South America.

Check out some television shows featuring Latinx leads and characters!

Perfect for the family, this Disney original tells the story of Elena Cañero-Reed, a passionate 13-year-old Cuban American middle school student with dreams of becoming President. Gina Rodriguez stars in the show as future Elena Cañero-Reed, the future President of the United States and a figment of the young Elena’s imagination.

This show, which features many Latinx actors, follows the Morales cousins as they attempt to save their grandpa’s taco shop and pursue their dreams while grappling with gentrification’s effects on their Los Angeles neighborhood.

This telenovela-inspired sitcom stars Gina Rodriguez as Jane Villanueva, a Venezuelan American woman who becomes pregnant after her doctor artificially inseminates her by accident. Jane soon learns that the father of her child is her former teenage crush, who is now the married owner of the hotel Jane works at.

Created by Julio Torres, Ana Fabrega, and Fred Armisen, this Spanish-language comedy is centered around a group of friends who turn their passion for horror into a business in which they create horror film-like situations to spook clients. Set against the backdrop of a mystical Latin American town, Los Espookys is a beautiful tribute to Hispanic heritage.

Inspired by the 2018 film Love, Simon, this teen comedy-drama series follows the story of Victor Salazar as he adjusts to a new city, navigates through familial conflicts, and struggles with his sexuality. Michael Cimino stars as the titular character and is of Puerto-Rican descent.

Available on Disney+ and Hulu

Beloved by critics and fans alike, this coming-of-age comedy-drama series follows the journeys of four street-savvy Latinx teenagers who live in a rough inner-city Los Angeles neighborhood. As the group begins high school, their friendship is tested while relationships develop and crumble.

Based on the 1975 sitcom of the same name, this reboot depicts the lives of a Cuban American family headed by Penelope Alvarez, a United States Army Nurse Corps veteran and mother of Alex and Elena. Rita Moreno stars as Lydia Riera, a former performer and Penelope’s mother.

FX’s Pose tells the story of many LGBTQIA individuals as they navigate New York’s underground ballroom scene in the 1980s. Michaela Jaé Rodriguez, a half-African American, half-Puerto Rican transgender woman, stars as Blanca Rodriguez-Evangelista, a trans woman with HIV/AIDS who founded the House of Evangelista.

This charming workplace sitcom follows a group of employees at the fictional big-box chain store Cloud 9 as they experience the highs and lows of working retail. America Ferrera stars as Amy Sosa, a Honduran American woman, who worked as an associate, floor supervisor, and assistant manager before being promoted to store manager.

Available on Hulu and Peacock

Melissa Barrera and Mishel Prada star as polar-opposite sisters who are brought back to their old Los Angeles neighborhood and forced to rekindle following unforeseen circumstances. Covering topics such as gentrification and homophobia, this series offers a poignant look at what it means to be Mexican American.