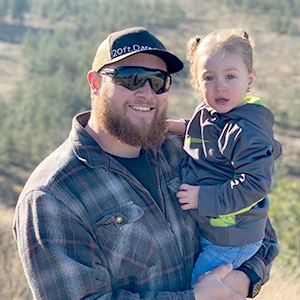 Sitting too much can be bad for your health, but in the case of field service technician Jacob B., sitting did a world of good and helped protect a senior customer.

In January, Jacob called on the home of a 100-year old customer—Mary—who was experiencing trouble with her phone and set-top box. Upon completing the work, Jacob gave his business card to Mary’s visiting daughter and said to give him a call if additional work was needed. A month later, Jacob revisited Mary’s home, but not for a typical service call …

A huge windstorm blew through Coeur d’Alene, Idaho, knocking out power in some areas for up to three weeks. During this time, Jacob received a somewhat frantic phone call from Mary’s daughter, asking if phone service was down as she’d been trying to reach her mother for the past couple days. Jacob wasn’t aware of any major phone issues but said he’d swing by Mary’s house to check on her and take care of her phone if there was a problem.

As Jacob drove through Mary’s neighborhood, it was clear the power had not been restored yet, as all houses and streetlights were dark. Jacob knocked on Mary’s door, reintroduced himself and mentioned that her daughter sent him over to check on her. “She was very wary about letting me in and even asked if I was going to beat her up!” recalls Jacob. “She had no idea the power was out and thought somebody was messing with her.”

Mary, wrapped in blankets and equipped with several very old flashlights, was stumbling around in the dark and unable to call anyone because her phone was cordless and needed electricity to work. Jacob checked the power company’s website through his cell phone and discovered service wouldn’t be restored for a few days, so he phoned Mary’s daughter with an update. She didn’t want Mary to stay at the house alone, so she was on her way to pick her up. However, it was going to be a couple hours as she lived out of town. With it getting darker outside, Jacob knew he needed to stay and make sure Mary was okay until her daughter arrived.

“Mary hadn’t eaten in two days—only drank water—because all appliances were electric, so while we waited, I ran an extension cord from the house to the inverter on my truck and we fired up the microwave and made some dinner. After that we just sat and talked to pass the time.” Mary’s daughter was beyond thankful for Jacob’s selfless act.

“Jacob is not only an exemplary employee that goes above and beyond his duties on the job, he also demonstrates admirable dedication to our community and customers, says Kevin L., assistant manager of Field Services. “I am grateful to have Jacob as an employee and look forward to many more years of working with him.”

Thank you, Jacob, for also just being a nice guy.