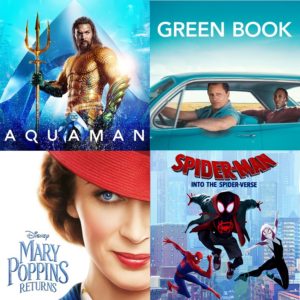 This month you can watch three Oscar winning films—plus lots of fun blockbusters and fantastic family options to boot!  Grab your remote and get watching because you’ve got a lot to movies to enjoy.

Olivia Colman won the Best Leading Actress Oscar for her portrayal of a frail Queen Anne, who is less interested in governing and more interested in racing ducks and petting her 17 rabbits. Anne’s close friend and caretaker Lady Sara (Rachel Weisz) uses her favor to help rule the kingdom until a new servant (Emma Stone) gains the queen’s attention—a power she doesn’t hesitate to use. This drama was nominated for NINE Academy Awards so you know there’s something there worth watching.

Julia Roberts stars as Holly, the mother of 19-year-old Ben (Lucas Hedges), a recovering drug addict who unexpectedly shows up at his house on Christmas Eve. Although Ben is supposed to be in rehab, she tells him he can stay for 24 hours. What unfolds during that time period is stunning, as Holly learns details about Ben’s past that are still influencing his future. The performances here are excellent and this is definitely not your traditional family drama.

Adonis Creed (Michael B. Jordan) is back in the ring with Rocky Balboa at his side. This time Adonis is fighting the son of Ivan Drago (the fighter who killed his father Apollo). Adonis faces his legacy, and in the process learns about himself and what’s worth fighting for. Although it’s a sequel, its reviewers and movie goers alike say it’s nearly as good as the first. Jordan’s portrayal of personal growth, the strong storytelling, and Tessa Thompson’s performance make this sports drama work, even though it’s not breaking any new ground.

With an 81% Certified Fresh and Audience Score, you know this movie is likely to be a hit in your living room, too. Mark Whalberg and Rose Byrne star as Pete and Ellie who decide to start a family. Their plan was to adopt one small child but end up fostering three siblings, creating an instant family—with chaos ensuing from there. While not perfect, this movie has its heart in the right place, filled with genuinely emotional moments while managing to be charming (and also real!).

Three time Oscar winner! The Green Book won for Best Picture, Best Supporting Actor (Mahershala Ali), and Best Screenplay—and now you can watch it at home. The movie is based the true-life story of a bouncer from the Bronx named Tony Lip (played by Viggo Mortensen) who is hired to drive world-class pianist, Dr. Don Shirley (Ali) on a concert tour in the Deep South. The performances are amazing, and the story is all the more poignant because it’s based on real life.

Wands up, Harry Potter fans! Newt Scamander is back, this time chasing after Gellert Grindelwald who escaped custody after the events of the first Fantastic Beasts movie. Fans get to see Dumbledore in his youth and the return of Tina and Queenie Goldstein, and Jacob Kowalski. The team races across Europe, landing in Paris in search of both Credence and Grindelwald. If you’re a fan of this universe, you’ll enjoy this return to the magical world.

This film was a HUGE hit with both critics and audiences. It won Best Animated Film at the Oscars, boasts a whopping 97% review score on Rotten Tomatoes and a 94% audience score. This movie is departure from the traditional Spider-man mythos, this time focusing on Brooklyn teen Miles Morales. He gains the same abilities as the Spider-man you’re familiar with, but quickly realizes there are others with the same from other dimensions. The visuals are as stunning as the plot and some even say it’s the best superhero film yet (animated or not!).

This sequel to the superfragalisticexpialidocious original follows Mary helping the newest generation of Banks children. It’s fun, honors the original, while also taking a fresh look at a classic. One reviewer said the movie is, “50 percent sequel, 50 percent reboot and 100 percent charming.” Grab and family and get watching!

Based on the novel of the same name, the movie follows Tish Rivers and her efforts to clear the name of her lover who is wrongly charged for a crime. This film was nominated for multiple Golden Globes and Academy Awards, with Regina King winning both for Best Supporting Actress. The movie is a rich drama, exciting legal thriller, while also making a strong social commentary statement.

And one more, just because we can’t resist…

Jason Momoa and Amber Heard star in this DC Universe blockbuster. This is an origin story, sharing Aquaman’s half-human, half-Atlantean history. This movie doesn’t really break new ground (and not just because it’s set in the ocean), but it’s a solid superhero offering. Both reviewers and movie goers agreed it’s a fun, entertaining, ride.