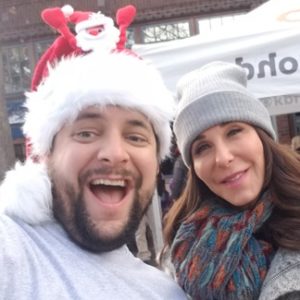 Central Oregon Daily Meteorologist Dorrell Wenninger, who works for TDS subsidiary Zolo Media, blew into Bend Oregon earlier this year and made a huge impact in the community in a very short time. The list of activities Dorrell volunteers for seems endless, but it’s this love of being involved and giving back that earned him the 2018 third quarter Volunteer of the Quarter designation.

Lisa Carton, Central Oregon Daily news anchor and friend who nominated Dorrell, says he is so dedicated to his new Central Oregon community that the community has embraced him back. “He’s only been with us for a few months [since April], but he’s made so many people smile, and he’s always willing to lend a hand. He’s my colleague and he makes me smile every day.”

Dorrell was quite shocked when he was named Volunteer of the Quarter. “Wow, I definitely did not expect this honor, but I sure do appreciate it,” he said. “Getting involved in the community and volunteering our time is something that just comes naturally to my wife, Brittany, and I,” Dorrell chuckled as he shared that every volunteer activity he does, Brittany ends up doing something, too, to help out or work side-by-side with him as they both give back.

So what does Dorrell do that keeps him busy in the community? Below is a list (and not all inclusive) of some of his volunteer activities:

The promotions crew wanted to set up a booth showing a seven-day weather planner, but Dorrell took it one step further. He set up a green screen to show people how the weather is done and to educate viewers about the technology. “This was so cool to do. I wanted to get the community involved and after seven hours at the fair, I believe we accomplished that,” laughed Dorrell.

Swinging with the Stars

The Sparrow Club works with schools to empower kids to help kids with medical needs. The non-profit sponsored a Swinging with the Stars fundraiser to raise money to pay for the Bend–sponsored child. Local celebrity Dorrell spent weeks practicing and preparing to do the foxtrot in the competition. Brittany joined many rehearsals to help Dorrell practice in his off-time and gave constructive feedback where needed. No, he didn’t win it, but all were winners in the end.

Street dogs are rescued from around the world, treated and prepared for adoption into loving homes in the Pacific Northwest. Dorrell and Brittany are currently fostering a dog named Mochito who Dorrell says is full-blooded awesome. “We provide the bed and breakfast for these rescues and prepare them for adoption in their “furrever” home,” said Dorrell. Their first foster, Lily who is a ‘full-blooded princess’, was a foster fail, as they ended up keeping her.>

Central Oregon Landcruisers
There is an unofficial dumping ground around the buttes where people throw trash, old bathtubs, refrigerators, hot tubs, etc. This organization came on the Central Oregon Daily show and said they would be cleaning up this area. Dorrell jumped in to help properly remove trash and create a safer environment for kids and people to enjoy this part of Oregon.

Sisters Middle School/Montessori school
Dorrell visits classrooms and talks about being a meteorologist and explains how math and science are important to weather forecasting.

Volunteer emcee/judge at the following events:

When Dorrell isn’t volunteering (and I have no idea how he has any free time left), he and Brittany are embracing the central Oregon lifestyle. The couple takes to the hiking trails to check out the amazing waterfalls, enjoys tenting excursions on the lakes, and recently completed the Bend Ale Trail Beer Tour.

Minnesota TDS TV customers: New channels are here!
What to buy your dog for Christmas