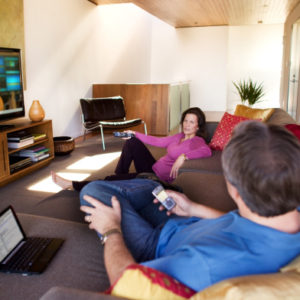 Those who have been around for a while might still remember the early days of the Internet, when the fastest speeds offered to residential customers were 768Kbps dial-up connections. In that far-flung time, it could take minutes to load a web page like THIS, hours to download a single photo from your grandkids (try telling that to these kids who post 925,600,000,000 pictures of cats on a daily basis), and online video was nothing more than a gleam in some young web developer’s eye.

These days, of course, the world of Internet speeds has completely changed. There are very few dial-up customers left (and yes, there are a few still hanging on), and most broadband connections receive, at minimum, 1Mbps into their home. Customers on state-of-the-art Fiber-Optic (PON) technology can now receive speeds of up to 100Mbps or more to their home, something that was once the exclusive province of massive corporations and high-level government institutions.

However, even as service providers continue to build faster and faster networks, the need for speed continues to increase as well. When you look at that ancient version of Yahoo! and compare it to the present-day version, it should be immediately apparent that the way the web is designed and used today is vastly different from what it used to be. Sites require an ever-increasing amount of bandwidth as their webmasters strive to pack more and more content onto their pages. For this and several other reasons we’ll get into below, it’s rare to find someone who hasn’t had an issue with the speed of their Internet connection. What we’ll attempt to do today is shine the spotlight on some of the most common reasons for slow speeds, as well as provide you with some tips for getting back on the fast track.

UPDATE: We have another, more recent blog on this topic here.

Too Many Cooks in the Kitchen

How Many Devices Do You See? (Hint: it’s more than 2)
Image Courtesy Flickr

When I receive a call complaining of slow speeds, the very first thing that we check is the number of devices connected to the network. Many users labor under the misconception that the speed that they see on their monthly statement, whether it’s 1Mbps, 5Mbps, 15Mbps, 25Mbps, or even 300Mbps, is the speed they should see reflected on every device they use. The reality is actually much more complex. The speed of your connection is, to use a crude analogy, one big pot that every device in your house draws from. You do not receive 15Mbps to each individual device, rather every device in your home shares that 15Mbps connection, and rarely does so equally. This means that when you’re trying to watch Netflix (for which the minimum recommended speed is 5Mbps) on your Wii, check Facebook on your laptop, and simultaneously download all the latest podcasts to your iPhone while your child plays video games on their Xbox, it is almost inevitable that one or all of these will be slowed down. When videos start buffering and pages are taking forever to load, the first question you should be asking is “how many things are using the internet right now?” Odds are that when you slim down the number of devices competing for speed, you will see a marked improvement.

Something Wrong Under the Hood

No one wants to think that there is anything wrong with their computer. It seems that today we are inundated with news stories about this virus and that virus creeping out of the Russian steppe, so much so that there is an almost violent reaction on the part of many people at the merest suggestion that there might be something wrong with their computer. “I don’t go to any of THOSE sites, so it can’t be my computer,” they say. “I have anti-virus, so it can’t be my computer,” come the protests.

The fact of the matter is, no one has designed a perfect anti-virus software. For every innovation in the structure of these online mousetraps, there is some enterprising young engineer quickly Frankenstein-ing together a better mouse. Also, viruses are not simply contracted from visiting disreputable websites. Often times hackers will embed virus code in sites that have nothing but the most benign intentions. In my own experience, I have spoken with older women who use the Internet for nothing but reading email and visiting recipe sites. Believe it or not, those sites are some of the most common vectors for infections, largely because their clientele is (and this is NOT a criticism) among the less computer-literate. Installing malicious code on a site frequented by computer engineers and network professionals doesn’t have nearly the effect as placing it on a site where people don’t always know how to identify when they’ve got a problem. The best solution if you believe that you have an infection is to have your computer professionally cleaned. If you are experiencing issues of this nature, then you should consider having a discussion with our Remote PC Support team, who can get rid of all the gunk in a matter of hours.

We could spend a whole entry talking about computer viruses (and perhaps we will in the future), but for now just remember this: Better Safe Than Sorry. If you think your computer may be infected, it’s best to deal with it soon. The longer you wait, the deeper the infection will go and the more harm it can do.

What’s Behind the Curtain?

Finally, when looking at whether or not your computer may be the cause of your online traffic jam, it’s important to check how many applications (apps) are running on your various devices. Similar to what we discussed with respect to the number of devices connecting to a network and how that impacts overall speed, the number of applications and what they’re doing can also affect the speed of your connection.

On most computers, it’s simple enough to tell what’s running (or so you may think). The average person looks at what windows are open on their desktop and believes that this is all their computer is doing. This could not be farther from the truth. Behind the scenes, on most computers, there are dozens of applications performing hundreds of small tasks every second. They are all-but-invisible, but they are there. What’s more, many malicious programs will hide in the same way, not appearing as a window on your screen, but running in the background where most people won’t notice.

A simple solution (if you’re a PC user) is to keep an eye on the Task Manager. This is a simple display which can be accessed on most devices by pressing CTRL-ALT-DEL on your keyboard and selecting Task Manager from the resulting menu. If you’re a Mac user, the process is somewhat more complex, so we’ll save time by providing a link to that process here.

A word of caution: Just because you don’t recognize a background application doesn’t mean you should immediately terminate it. As before, if you think you have an infection and are NOT a computer repair professional, you should contact the folks who know what they’re doing. Haphazardly terminating applications can do serious harm to your system, so don’t go closing things all over the place.

In the spotlight: A day in the life of a Sherwood, Wis. field service technician
Tech news roundup for August 2