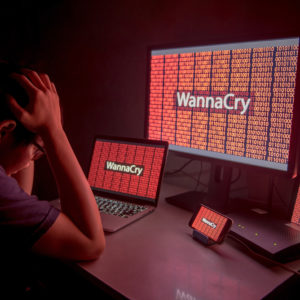 You’ll wanna cry at the rise in ransomware

Last month’s WannaCry ransomware attack took the world by storm, making lots (and lots and lots) of people want to cry. Reportedly the files on 200,000 computers across the globe were encrypted and held ransom until victims paid to restore them.

While that particular attack has now come and gone, ransomware as type of malicious software isn’t going anywhere. According to the New York Times, it’s “one of the popular and lucrative ways to attack computers. Heck, in 2016 the FBI estimated that ransomware payments hit nearly a billion dollars (yes, with a “b”).

With that kind of money to be had, criminals are not going to give up a strategy that works. In fact, they’re just going to come up with angles to make you pay. Take, for example, a uniquely horrible new ransomware “Ponzi scheme” being reported in the media called Popcorn Time.

Here’s how it works: You can either pay up OR share a link to the ransomware and get two of your friends to fall for it. If they pay up, your own files get decrypted for free. Throwing others under the bus to avoid getting hurt yourself? That takes ransomware to the next level.

Despite the constant evolution of these schemes, there are some simple and consistent things you can do to be less vulnerable to ransomware:

1. Always download the latest computer updates. This is especially true for your computer’s operating system. In fact, set up auto updates and then you don’t need to even think about it. Here’s how to do it in Windows, here’s how to do it with a Mac. Note: The Windows vulnerability that let WannaCry in had been patched months earlier—but many organizations hadn’t updated their systems. Had they done so, WannaCry wouldn’t have gotten off the ground.

2. Back up your files remotely/externally. Backing up your computer files is never a bad practice, but you need to go a step further to be immune from ransomware. Store a back-up of your files on an external hard drive. Be sure to refresh it daily or weekly. You could make that super easy by using an online service so your files will be automatically backed up and always current. Taking this action means if you do get hit, it’s no big deal—you can forget about paying ransom and simply restore your files from the stored backup.

3. Don’t open suspicious email attachments. If you don’t know the sender, or even if you do, think twice before clicking on an unexpected attachment. And don’t just worry about attachments or links that have “EXE” at the end (EXE stands for “executable” which means it’s a kind of file that can be run as a program). Ransomware is actually most prevalent in PDF and Microsoft Office document attachments.

4. Make sure you have updated antivirus software. Malware is rapidly evolving so one of the best ways to avoid viruses, ransomware, spamware, etc. is to always run up-to-date antivirus protection. It’s not full-proof—nothing is—but it’s a solid first line of defense. We  offer one of our own that’s always current (and you don’t have to do a thing!), but PC Magazine also recently reviewed 40 different antivirus options (UPDATE: we were told the PC Magazine link isn’t accessible to those with vision impairments. Comparitech offers their own reviews on a page that is.)