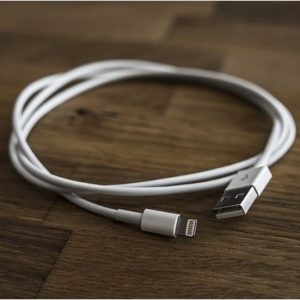 The cord that came with your device isn’t the problem. After-market cables, or the one left on the table at Starbucks, or that one you borrow from that nice stranger? Stop right there!

A security researcher is now selling mass-produced Lightning cables, designed to hack into your computer’s Wi-Fi.

The cords look just like any other average USB power cable, but its creator managed to squeeze a Wi-Fi chip inside. As long as you use the cord to connect your phone to your computer—whether you’re working on a PC or a Mac—a hacker up to 300 feet away can access your computer and do all kinds of bad things.

Called the O.MG Cable, it’s designed so your computer thinks it’s just another peripheral device, like a mouse or keyboard. This allows the hacker to send information right to your computer screen, such as malicious Google log-in screen to collect your username and password. Worse, the cable can be programmed to connect to a network, such as a Wi-Fi or cellular hot spot, expanding the possibilities for potential attacks.

Although using USB power cables is new, don’t forget that the equally ubiquitous USB thumb drives have been a potential source of malware for a long time. In fact, criminals will even target victims. PC World reports that a Hollywood exec received a package with a USB that appeared to be from a well-known production company. On the drive was a movie trailer that actually installed malware.

An ounce of prevention is worth a pound of cure

With USB-based hacks now expanding beyond thumb drives, what can you do?