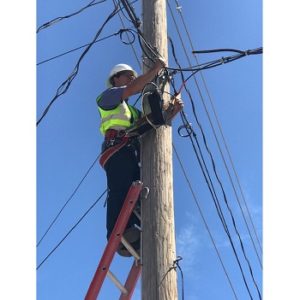 We admit that utility poles are not generally a thrilling topic of conversation. However, like anything utilitarian, they’re also super important—even to you. Not only do they carry power cables, they’re also a key part network builds.

If we’ve announced that we’ll be working in your area, read on to learn a little more about why we hang cable on utility poles and what that process looks like (hint: it’s a lot more involved than you probably think!). Not only will you better understand the activity you’re seeing as you drive around your community, you may end up with enough pole knowledge to impress your family or win at your next trivia night.

Every pole has an owner

Municipalities typically don’t own poles, but they decide where they can be placed (and how many are allowed). The vast majority of poles are owned by power companies. That said, some are owned by local telephone providers like us, and cable companies also own their fair share.

Fun fact: Most poles in the U.S. are made out of Southern yellow pine

Although the pole owner is the landlord, other companies can rent space on the pole to hang their cable—and really, they have to. Municipalities have regulations about how many poles can be placed and where so service providers cannot just walk in and place their own. Instead, everyone works together to use the existing pole space. Also, just like an apartment building, the landlord can set unique and specific rules about their poles.

Fun fact: There are around 180 million telephone poles in the U.S.

It all starts with permission

The first step in adding cable to a pole is asking the owner for permission—which is sometimes easier said than done. There isn’t a single master directory of who owns which poles so it can take some time to figure out who to ask. Once permission is given, sometimes work to add cables can begin immediately…and sometimes a lot more has to happen before we can (more on that later).

Fun fact: One of Samuel Morse’s partners (of Morse code fame) had the idea to use wooden poles to hang telegraph wires—the start of the utility pole.

Poles aren’t one-size-fits all. Instead, they come in different heights and widths. Which kind you need depends on the how much weight the pole needs to hold, and how many cables (we’ll explain that scientific process in a bit) need to fit. There are actually 15 different pole size classifications, with the largest capable of holding 10,000 pounds, and the smallest rated to carry 370 pounds.

Fun fact: Utility poles are 5-6 feet longer than they appear (they’re buried that far into the ground)

Specialized engineers run all sorts of complicated calculations to determine what sizes pole are needed where. The process is very scientific and has to consider:

Fun fact: The top-most cables on most utility poles are electrified. That area is called the “power space” and, to minimize risk of electrocution while working, communication wires must be 80” below that area. 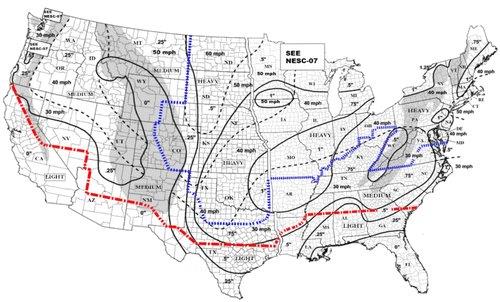 Fun fact: Although southern states don’t get ice, pole engineers must consider the heat. Cables have to be hung high enough to factor in the potential stretch that happens when they get hot.

Bring in the replacement!

Are you seeing poles being replaced in your area? That means one of two things. Either the current pole’s space has been maxed out or it can’t handle the load it needs to (or both!). The cost of a new pole is shared between the pole owner and the company who needs the space—but the replacement work is done by the owner and on their schedule.

Fun fact: The lifespan of a utility pole is about 45 years.

Just like there are rules about how many cables can be on a pole, there are rules about how to transfer lines from an old one to a new. This is known as Make Ready Work. Federal law dictates that the cables can only be moved in the order they were originally placed on the pole. Each company is responsible for contracting, scheduling, and moving their own cables. This regimented sequence is designed to minimize outages or safety concerns, but it also creates many interdependencies to complete an aerial build.

Why we use utility poles

After all of this, you might be wondering why we don’t just bury all the cable. Well, we do—but most network builds take a hybrid approach. That’s because burying isn’t always possible—roads, railroad tracks, rivers, and lakes can all get in our way. Soil conditions also have to be considered. New Hampshire, for example, is called “The Granite State” for a reason and the rocky outcroppings make burying cable difficult at best. Even if it’s theoretically possible to dig and bury the cable, our goal is always to minimize disruption as we build. Hanging the cable is often the best and fastest way to accomplish that. An added bonus of “going high” with cable? The same reason Morse put his telegraph wires on poles—it consistently keeps them out of harm’s way.

Fun fact: Recent legislation has been aimed to try and simplify Make Ready Work. The so-called One-Touch Make Ready process has been adopted in a few states, and it’s starting to gain momentum.