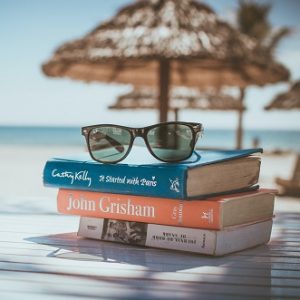 We have officially transitioned from cuddling-under-a-blanket-by-a-fire weather to sipping-iced-tea-on-the-porch weather, and with that comes a new round of books to read. If you haven’t started working on your summer to-read list, now is the time. Whether you’re still on book one or rapidly checking off titles, take a look at these books recommended by TDS associates.

Wisconsin nurse, Mattie Winston, is wryly cynical, politically incorrect, and inherently nosy—traits that suit her well when she trades in her hospital scrubs for a plastic apron and autopsy table. As a coroner, she still gets to use her slicing and dicing skills, but now, instead of saving people’s lives, she is dedicated to finding how and why they died.

When murder and mayhem come to town, Mattie’s anatomical knowledge and no-nonsense approach help her sort out these crimes despite her knack for stumbling into trouble. Not only is this book a laugh-a-minute ride, see if you can figure out whodunit before Mattie does.

Robin also highly recommends “Summer of ’69” by Elin Hilderbrand. “It kept me up reading ‘one more chapter’ well past my bedtime and I devoured all 400+ pages in less than three days.”

“How to Do the Work: Recognize Your Patterns, Heal from Your Past, and Create Your Self” by Dr. Nicole LePera

If 2020 left you with extra stress or struggles, battles or bruises, try a self-help book this summer.

In “How to Do the Work,” clinical psychologist Dr. Nicole LePera offers both a manifesto for self-healing as well as an essential guide to creating a more vibrant, authentic, and joyful life. Drawing on the latest research from a variety of scientific fields, Dr. LePera offers readers the support and tools that will allow them to break free from destructive behaviors to reclaim and recreate their lives.

“I just started reading it, but I am already very intrigued by her approach of healing mentally and physically at the same time,” Liza said.What other books should we all read this summer? Share your favorites or what’s on your to-read list!

“The Nightingale” by Kristin Hannah

It’s 1939 in the quiet village of Carriveau, France. Vianne Mauriac has just said goodbye to her husband, Antoine, who was headed for the Front. Vianne doesn’t really believe the Nazis will invade France, but invade they do. When a German captain requisitions Vianne’s home, she and her daughter must live with the enemy or lose everything. Vianne’s sister, Isabelle, is a rebellious 18 year old. After being betrayed by the man she loved, Isabelle joins the Resistance and never looks back, risking her life to save others.

“The Nightingale” tells the stories of two sisters, each embarking on their own dangerous path toward survival, love, and freedom in German-occupied, war-torn France. With courage, grace, and powerful insight, bestselling author Kristin Hannah captures the epic panorama of World War II and illuminates an intimate part of history seldom seen: the women’s war.

Beth also recommends: “One to Watch,” “The Last Thing He Told Me,” “People We Meet on Vacation,” “Bringing Down the Duke,” “A Rogue of One’s Own,” “Every Last Fear,” and “The Giver” series.

“Wild Rescues” is a fast-paced glimpse into the exciting lives of paramedics who work with the National Park Service—a unique brand of park rangers who respond to medical and traumatic emergencies in some of the most isolated and rugged parts of America.

In 2014, Kevin Grange left his job as a paramedic in Los Angeles to work in response areas with millions of remote and roadless acres. And now, he’s sharing his stories.

“The author shares firsthand what it’s like to try to reach people injured in remote places and the split-second life and death decisions he needs to make in regard to patient care,” Patrick said. “Kevin not only provides a great picture of our national parks, but he also shares great stories about his colleagues and the patients who depend on him for care.”

“My Sister, the Serial Killer” by Oyinkan Braithwaite

Korede’s sister Ayoola has just murdered another boyfriend—the third to go, in fact. It would be game over for Ayoola if it wasn’t for Korede’s practicality and loyalty. Korede knows the best solutions for cleaning blood, has a car trunk that’s big enough for a body, and manages to keep Ayoola from posting pictures of her dinner to Instagram when she should be mourning her “missing” boyfriend. But now when Korede’s love interest, a handsome doctor, asks for Ayoola’s phone number and his life is now at risk, she must decide who she will protect.

Sharp as nails and full of deadpan wit, Oyinkan Braithwaite’s deliciously deadly debut is as fun as it is frightening.

Garrison also plans to read the following books this summer: “Dracula,” “Moby Dick,” “The Electric Heir,” and “Thank You for Being Late.”

“It” by Stephen King

Welcome to Derry, Maine. It’s a small city, a place as hauntingly familiar as your own hometown. Only, in Derry, the haunting is real.

Twenty-eight years have passed since seven teenagers battled an evil creature that preyed on the city’s children. For almost three decades, Derry was a normal, safe place. Yet again, children are being murdered, and repressed memories of that terrifying summer are returning.

Following a promise they made years ago, the seven friends return home once more to battle the monster lurking in Derry’s sewers.

“The Midnight Library” by Matt Haig

Have you ever wondered how your life would have changed if you had made a different decision at any point in time?

Somewhere out beyond the edge of the universe, there is a library that contains an infinite number of books, each one containing the story of another reality. What if you had the chance to go to the library and see the alternative realities for yourself?

In “The Midnight Library,” Nora Seed finds herself in that position. Faced with the possibility of changing her life for a new one, she must search within herself to decide what is truly fulfilling in life and what makes it worth living in the first place.

“A Tree Grows in Brooklyn” by Betty Smith

From the moment she entered the world, Francie Nolan needed to be made of stern stuff, for growing up in the Williamsburg slums of Brooklyn, New York, demanded fortitude, wit, and strength of spirit. Often scorned by neighbors for her family’s erratic and eccentric behavior, such as her father’s taste for alcohol and Aunt Sissy’s habit of marrying serially without the formality of divorce, no one could say that the Nolans’ life lacked drama. Rotating between overwhelming, heartbreaking, and uplifting, the Nolans’ daily experiences are raw and tenderly threaded with family connectedness.

“The Illuminated Edda” by Andrew Valkauskas

The Viking tales of gods, giants, and heroes come alive within the pages of “The Illuminated Edda.” Visit the majestic city of Asgard, home of the gods. Fight dragons alongside legendary hero Sigurd. Get entwined in Loki’s schemes as he saves the gods from disaster and then witness as he makes matters worse.

“The Illuminated Edda” contains a brand-new translation of the Poetic and Prose Eddas, using contemporary prose so it’s a pleasure to read. Over 600 pages are devoted to the exploration of the ancient beliefs of the Viking age, each illuminated with unique, evocative art.

“The Giver of Stars” by Jojo Moyes

Alice Wright marries handsome American Bennett Van Cleve, hoping to escape her stifling life in England. But small-town Kentucky quickly proves equally claustrophobic, especially living alongside her overbearing father-in-law. So when a call goes out for a team of women to deliver books as part of Eleanor Roosevelt’s new traveling library, Alice signs on enthusiastically.

These heroic women refuse to be cowed by men or by convention. And though they face all kinds of dangers in a landscape that is at times breathtakingly beautiful, at others brutal, they’re committed to their job: bringing books to people who have never had any, arming them with facts that will change their lives.

“The Baby Thief: The Untold Story of Georgia Tann, the Baby Seller Who Corrupted Adoption” by Barbara Bisantz Raymond

Georgia Tann, nationally praised for arranging adoptions out of her children’s home in Memphis, Tennessee, was actually a baby seller who terrorized poor, often unwed mothers by stealing their children and selling them to wealthy clients like actors Joan Crawford and Dick Powell. During her 26 years of operation from 1924 to 1950, Tann sold over 5,000 children, but that’s not all. She abused some of the children, and placed others with pedophiles. In fact, so many children died due to neglect that Memphis’ infant mortality rate soared to the highest in the country.

An adoptive mother and award-winning journalist who interviewed hundreds of Georgia Tann victims, Barbara Raymond has written a riveting account of a dark chapter in American history.

JoLeta also recommends “Before We Were Yours” by Lisa Wingate and “Necessary Lies” by Diane Chamberlain.

Lydia Quixano Pérez lives in the Mexican city of Acapulco. She has an 8-year-old son, Luca, the love of her life, and a wonderful husband who is a journalist. When Lydia’s husband’s tell-all profile of a new drug cartel leader, Javier, is published, none of their lives will ever be the same.

Forced to flee, Lydia and Luca find themselves making their way north toward the United States, which is the only place Javier’s reach doesn’t extend. As they join the countless people trying to reach el norte, Lydia soon sees that everyone is running from something. But what exactly are they running to?

“American Dirt” will leave readers utterly changed. It is a literary achievement filled with poignancy, drama, and humanity on every page.

What other books should we all read this summer? Share your favorites or what’s on your to-read list!

*Book descriptions were taken from the linked websites.