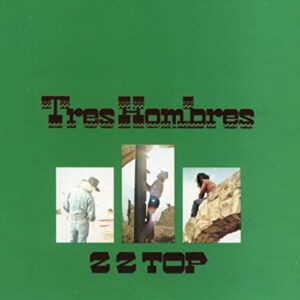 By Austin Krueger on August 3, 2021 in Online Life

Growing up, there were certain constants I can still point to through the memories of my formative years. Music is a big part of that for me, and one band that definitely made it onto my headphones frequently was ZZ Top. They had so many iconic tracks that still see significant radio play to this day. This means hearing a song at age 15 (or 30+) could remind me of an event that happened when I was 5. This week’s post is dedicated to the band’s larger-than-life bassist Dusty Hill, who passed away on July 17 at the age of 72.

Time sure flies—it’s been four years since I first discussed ZZ Top on the blog. That post discussed their formation and then the absolutely iconic Eliminator album. But I wanted to rewind a bit to some of their more original sound from before the band hit it big.

After the band’s first two studio releases in ’71 and ’72 didn’t take off, expectations for the group were pretty low. London Records was getting ready to throw in the towel on the trio if the third studio release saw similar sales figures. They hit the studio in Memphis, Tennessee and right away, the vibe was different from past recordings. Frontman Billy Gibbons said of the album: “We could tell we had something special. The record became quite a turning point for us. The success was handwriting on the wall, because from that point we became honorary citizens of Memphis.”

Tres Hombres hit shelves in July of 1973. Despite Billy’s positive outlook, the critical and commercial reception was initially very lukewarm. Rolling Stone felt while the “Southern rock & roll sound” was becoming popular, ZZ Top themselves were “only one of several competent Southern rocking bands”. Despite that lackluster critical reception, the album has done nothing but gain appreciation and more fans since. The same publication did an about face when naming it on their top 500 albums of all time twice, both in 2003 and the revision in 2012. Bands like Motorhead and Phish have covered tracks off this record dozens (and dozens) of times both live as well as on commercially released albums. And just from a flat-out obvious perspective, what’s the longest anyone in the history of living life and listening to music has gone without hearing “La Grange”? Maybe a week or two?

While I was in college, our television service would play ZZ Top on a seemingly endless loop. And while that may seem tiring over time, they had so many standards—and during their videos they’d run little trivia tidbits on screen while the music was playing. That’s how I learned the only member of ZZ Top without the iconic beard was ironically named Frank Beard.

Tres Hombres has sold a couple million copies worldwide to date—but that’s not really the point. This album gave a Mount Rushmore-worthy band their start in the industry that now leaves them as one of the most recognized in history. Everyday that passes, ZZ Top sells more records—now approaching the fifty million mark. They even had the amazing recognition of playing Super Bowl XXXI in 1997, something obviously only a handful of artists can say they accomplished.

According to Gibbons, at the end of his life, “Dusty emphatically grabbed my arm and said, ‘Give Elwood the bottom end, and take it to the top.’ He meant it, amigo.” Translation, Dusty’s guitar tech Elwood Francis will replace him in the band, and ZZ Top’s legacy will not only live on, but their touring will too. See them live, listen to this one today too. A tribute to not only a legendary bassist, but one of the best bands to ever do it.