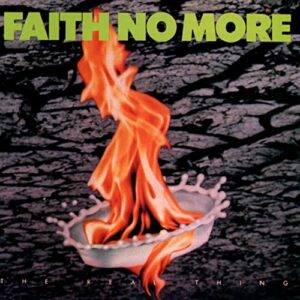 By Austin Krueger on January 4, 2022 in Online Life

Happy New Year music fans! I often start the year with some artists that I’m either not or only modestly familiar with. Today’s featured act has two singles that I really enjoy—but I’ve never picked up a full album. You probably haven’t either, so let’s listen together!

In 1979, vocalist Mike Morris and keyboardist Wade Worthington were in a band called Sharp Young Men based out of California. Drummer Mike Bordin and bassist Billy Gould would join shortly thereafter. None of the guys were overly fond of the band’s name, Morris proposed Faith In No Man, and then settled on: Faith. No Man. After recording a couple of tracks in 1983 out of a garage, the entire group decided to leave Morris behind and form Faith No More. The name was to emphasize “the man” (Morris) was “no more”. The newly titled bunch trialed several vocalists and guitarists, including a brief spell with Courtney Love. They eventually settled in with a couple of new guys and their first formal release was a live performance on side A and a 20-minute instrumental track on side B. The debut studio release came out in November of 1985 without the support of a record label. Needless to say, its popularity wasn’t exactly off the charts.

Around 1987 Faith No More linked up with Slash Records and dropped their second album. While the end result was similar on this effort as their first, some felt the band was getting closer to hitting it big. They underwent another major change in 1988 by bringing on yet another lead singer—this time going with Mike Patton. Little did the group know, but his signing came with perks. Mike had written essentially an entire album, and everyone in the group dug the vibe.

Faith No More hit the studio right away and The Real Thing his shelves in June of 1989. While they had to rein in some of the lyrical content, recording was fairly quick and painless. The release was backed by a tour and the label marketed them as “alternative metal.” They toured and played with a much different genre of bands. Instead of pop acts, they were getting lumped with Metallica and Soundgarden—a significantly different vibe. Around the same time MTV was making waves and dominating with the younger audience. One of the lead singles “Epic” was the most heavily played video on the channel for the year.

Critically, this album was anointed as a masterpiece. It would take a year to enter the Billboard 200, but eventually it peaked at No. 11 after “Epic” became a smash. It has sold nearly five million copies worldwide to date, the band’s best effort. Several modern guitarists have cited the album as their most major influence behind getting into the business. They recall hearing it as a heavy album that didn’t have to be considered metal. It was like Faith No More invented their own sub-genre, mixing heavy music with melody and arrangements. For me, Patton’s vocal is what always stuck out. When you hear a single like “Epic”, there is no mistaking who it is. And I completely concur with the artists who it inspired. Their riffs were loud and in-your-face, but the underlying music had substance. It wasn’t all about headbanging, it was about crushing the vocal in the car along with showing off your air guitar skills.

While Faith No More has broken up and gotten back together more times than I can recount, there is no debating their influence. Krist Novoselic even thanked them as “paving the way” for Nirvana, very high praise. Every modern nu metal band seems to feel the same, showing these guys might be one of the best bands you’re not listening to. Give it a whirl today—what better way to start your new year than something so groovy it’s out of sight?