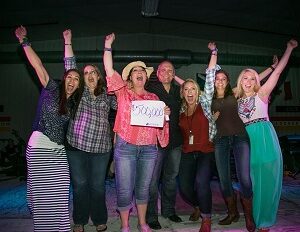 TDS Volunteer of the Quarter

In May 2012, Aly Wolff, a friend of TDS Inc. staff accountant Jessica Hall, was diagnosed with a neuroendocrine tumor in her liver. Jessica and her friend — who were close with Aly’s older sister — along with Aly’s friends and family, gathered together to brainstorm a way to help. The result? An annual charitable event, which now plays a huge part in Jessica’s life and also celebrates Aly’s.

“We wanted to take the focus away from the bad parts of cancer and turn them good,” Jessica said. Keeping this in mind, Aly and her loving support system were able to fulfil one of her goals: to start a successful charity.

The Aly Wolff Foundation, Inc. was formed in March 2014.The first fundraising event, “Aly’s Honky Tonk Hustle,” took place in May 2013. More than 800 people participated in the 5K run in and the “honky tonk” after party. Although Aly passed away before race day, she played an important role in planning the event and designing the theme.

Since that first run, Jessica has played a large role in organizing the logistics of the race. She was a high school runner, so she knows a bit about running and how to prep for a 5K. However, there are more preparations for a race than one might expect, including clearing the race route with the village of McFarland, getting police officers to block off roads, and actual race day setup and registration. Jessica helps with it all!

For three years now, the Honky Tonk Hustle has been held annually in memory of Aly. With Jessica’s help, the Aly Wolff Foundation has raised over $500,000 for cancer research at the UW Carbone Cancer Center. Jessica has been part of the Wolff family support system since the start and plans to continue volunteering for a long-time to come.

“Volunteering for this foundation has become second habit,” Jessica said. “It is such a worthy cause and it is important that we bring awareness to neuroendocrine cancer because many people are unfamiliar with it.”

To learn more about Aly Wolff’s story or to donate, visit alyshonkytonkhustle.com. The next Honky Tonk Hustle is set for May 20, 2017.

Congratulations Jessica on being named Volunteer of the Quarter — and thank you for your hard work!